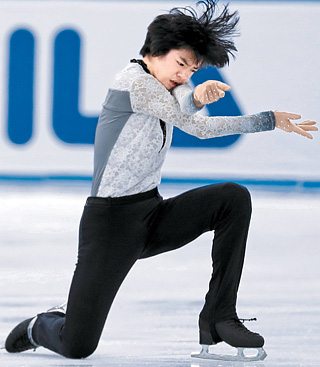 Cha Jun-hwan performs during the free skate program at the South Korean Figure Skating Championship on Sunday. Cha excelled rapidly under the tutelage of Coach Brian Orser and is aiming for a gold medal at the PyeongChang Olympics. [KIM JIN-KYUNG]

A new star has appeared in the Korean figure-skating firmament, hopefully one that will prove as bright as Kim Yuna.

In the men’s singles event at the 71st National Figure Skating Championships, held at the Gangneung Ice Arena in Gangneung, Gangwon, Cha-Jun-hwan received 156.24 points in free skating on Sunday and the day before received 81.83 points in the short program, taking first place in the competition with a combined score of 238.07 points.

A constant behind both Kim and Cha’s success is Coach Brian Orser, 56, of Canada. Orser kept rubbing his hands in anticipation at the start of Cha’s free skating performance. When Cha completed his four revolution jump, the quadruple salchow, Orser relaxed. During Cha’s sprightly step sequence, Orser’s shoulders swayed. When Cha fell in the middle of a jump while attempting a triple flip-single loop-triple salchow combination, Orser encouraged his young disciple by clapping.

While a crowd of reporters gathered around Cha, Orser had a satisfied expression. “Jun [Cha’s nickname] is Korea’s skating star,” Orser said.

The path Cha is walking on is a new page in South Korean men’s figure skating history. This was the first time a Korean men’s figure skater scored above 80 points in the short program. Last year, Cha claimed a new record of 242.44 in the Korea Figure Skating Ranking Competition for Men’s skating. Furthermore, in the finals of last month’s International Skating Union’s (ISU) Junior Grand Prix, Cha produced a bronze medal. This was also a first for a Korean men’s skater to be awarded a prize in the Junior Grand Prix finals.

“I saw a video of Jun’s performance for the first time two years ago on Youtube,” said Orser. “He had the talent to incorporate other styles to his own. His exceptional speed reminded me of Kim Yuna.”

Similar to Kim and Hanryu, Cha grew rapidly. He was able to perfect his previous weak point, the triple axel jump, in just a year. He has also added the quadruple jump to his repertoire .

“On Orser’s team, there are separate technical coaches for jump, spin, step and choreography,” said Cha. “You train with the relevant coach in the area needing improvement and Coach Orser looks over the entire program.”

“The basics of guiding philosophy are listening attentively,” Orser explained. “The skaters come from countries all over the world. It is important to listen carefully and resolve any issues.”

While coaching Cha, Orser is focusing mostly on expressiveness. “These days [in figure skating], artistry is important,” said Orser. “Jun is quite bashful and for a time he only mechanically performed jumps, but now he’s not like that.” Cha frequently observes himself in the mirror to see what kind of expression he makes.

Cha, 15, is debuting in the senior level starting in the 2017-2018 season and will be able to compete in the PyeongChang Winter Olympics in February. To help prepare, Cha is aiming for another medal in the season’s last competition, the World Junior Figure Skating Championships in Taipei next March.

“When competing in Olympics hosted in one’s own country,” Orser said, “the fans’ expectations are enormous. There is a high risk of injury by hurriedly raising the jump difficulty in order to make a result. I will methodically build up his skills. In order to make a diamond, one must have time and patience. Korea made an exceptional diamond before called Kim Yuna. Korea can make one again.”