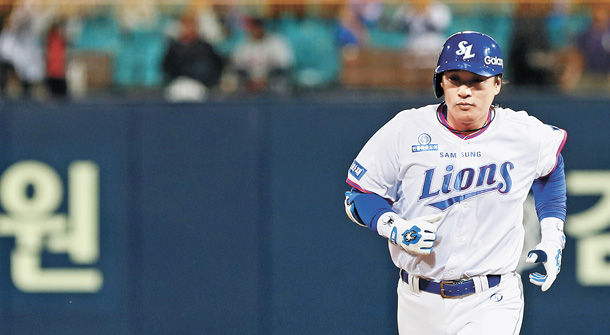 Lee Seung-yuop of the Samsung Lions races to second base after hitting a two-run home run in the bottom of the fifth inning against the LG Twins on Oct. 4. [YONHAP]

Lee Seung-yuop, South Korean baseball’s all-time home run leader, is preparing for his final professional season the same way he did for his previous 22 seasons: keeping his head down and putting in the work.

Lee’s Korea Baseball Organization (KBO) club, Samsung Lions, held their kickoff meeting for 2017 on Monday, sans their players. Only the coaches and the front office staff were on hand at Daegu Samsung Lions Park in Daegu, some 300 kilometers (186 miles) southeast of Seoul, as the players are working out on their own during the “inactive” period designated by the league. Spring training will open on Feb. 1.

Players who wish to train in their own ballparks may do so as long as they don’t get any assistance from their coaches. And Lee, entering his final season at age 40, has been doing just that this month, while some players have chosen to set up camp in warmer regions outside the country.

“It’s not too cold here, and the ballpark has great facilities,” Lee said of the stadium that opened last year. “I don’t really find it necessary to leave the country.”

Lee is the KBO’s career leader in home runs with 443 in 14 seasons, and he likely would have hit more than 600 if he hadn’t spent eight seasons in Japan.

And he isn’t just hanging around on his star credentials and taking up a spot on the Lions’ bench. Last year, he batted .303 with 27 home runs and 118 RBIs, the highest total since he returned to the KBO in 2012. He has hit at least .300 in each of his past three seasons, while averaging 28 homers and 103 RBIs per season in that span.

Joining Lee at the stadium Monday were rookies and players who’ve recently completed their mandatory military service - in other words, the ones with the most to prove in 2017. Lee’s legacy in South Korean baseball has been secure for some years, but the man long known as a consummate professional with tireless work ethic apparently doesn’t see it that way.

“If I want to earn my playing time during the regular season, I must keep working hard, even if it’s only January,” Lee said. “I’ll try to put up the best numbers I possibly can.”

Despite Lee’s age-defying performance, the Lions finished second from last in the 10-club league last year. Given that the Lions had won five straight pennants and four straight Korean Series championships beforehand, their fall from grace was as spectacular as it was mind-boggling.

Lee said he’s determined to help bring back the glory for the proud franchise, the only KBO team he’s known.

“This will be my final year to play at such a great ballpark,” he said. “And I’d love to play postseason games right here at Lions Park.”