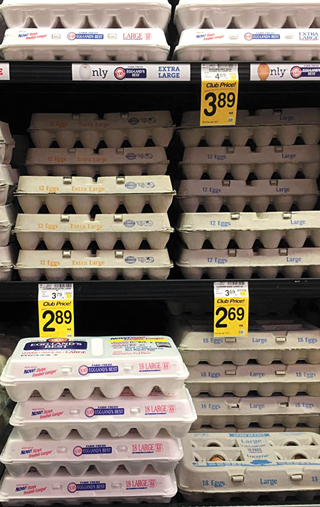 Korea’s egg supply has been hurt by the outbreak of avian flu. Eggs from the United States are expected to be on the market here before Lunar Year this month. [YONHAP]

Almost a week after the government said it would lift tariffs on eggs imported from overseas, roughly 1.64 million eggs are expected to arrive from the United States this week.

The eggs are likely to be on the market before Lunar New Year at the end of the month.

“The 1.64 million eggs will be arriving around the weekend after being boarded on a plane,” said Lee Joon-won, vice minister of agriculture, food and rural affairs. “After passing through quarantine, the eggs will likely be supplied in the local market before the Lunar New Year.”

The government a week ago said it will lift tariffs for six months on eight kinds of eggs amounting to 98,600 tons. This is expected to help lower the prices on the imported eggs. Local egg prices have skyrocketed in recent months.

Additionally the government has allocated 900 million won ($748,000) to assist in importing more eggs from overseas. The government will pay half of the costs to import eggs until next month. This includes a maximum 1 million won to deliver 1 ton of eggs on airplanes and a maximum 90,000 won per ton of eggs that is shipped.

The government said it will consider additional support depending on the supply of eggs.

The egg supply has been dented due to the nation’s worst bird flu epidemic that started late last year.

Vice minister Lee said imported eggs will not have a significant impact on the local retail price since imported eggs themselves are not cheap. Each is worth 300 won. He said the main target of imported eggs distribution in the market is to keep a lid on local egg prices.

“Since more than 30 percent of our fresh eggs have been destroyed,” said Lee, “there is a limit to stabilizing the price [under such circumstances.] If the local egg prices continue, the government will do its best in stabilizing the supply.”

Meanwhile the bird flu crisis seems to be stabilizing. Only one egg farm, in Asan, South Chungcheong, reported suspicion of an influenza outbreak over the weekend. As of Monday, 776 farms have slaughtered 31.2 million birds.