Jo Hyeon-cheol makes it look easy : The erudite 30-year-old plans a career as both an actor and director

Jo Hyeon-cheol makes it look easy : The erudite 30-year-old plans a career as both an actor and director 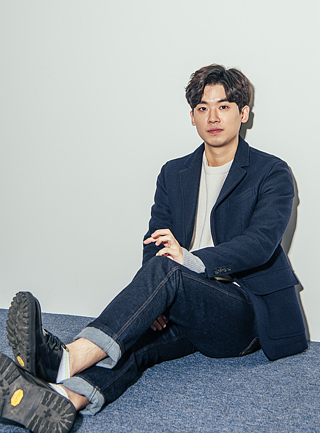 Actor Jo Hyeon-cheol may not be a familiar face to many. But he certainly is on his way to stardom after appearing in a number of commercially successful films, including the latest action hit “Master.”

Starring as the best friend of a genius hacker (Kim Woo-bin), the 30-year-old plays a warm-hearted character named Gyeong-nam, who has a memorable look reminiscent of popular rapper Mad Clown, who gained recognition through the second season of the hip-hop survival audition program “Show Me the Money” (2013).

The giant circular glasses that the actor wears in the film make him look quite similar to the rapper - or maybe his older brother.

“You really look like Mad Clown with those glasses on,” said some of the crew upon seeing Jo at a recent photo shoot.

Having studied film at Korea National University of Arts, Jo has played diverse roles in commercial hits such as “Tunnel” (2016), where he played a clumsy rescue worker, and “Coinlocker Girl” (2014), where he played a man with intellectual disabilities.

For a man who has played such a variety of characters, the role in “Master” was effortless for Jo.

However, one concern he had was whether he would be able to “catch up to the quick pace of ‘Master,” which he ended up successfully pulling off.

Although he is usually very shy and taciturn, he turns into a completely different person in front of the cameras, according to “Master” director Jo Ui-seok.

“It wasn’t easy for me to have an everyday conversation [with Jo] because he was so shy. But I learned through his previous work that he is able to fully exude energy in front of the camera.”

For Jo, who has experience directing short films while attending university, acting was a natural flow of life.

“I began directing and acting at the same time,” said Jo. “Maybe it is because of that reason that I didn’t find acting that difficult. When shooting ‘Tunnel,’ I truly wanted to make a grand statement as an actor. However, my thoughts started to change, as I began to think that surrounding people’s lives seem more marvelous.”

Based on that change of thought, Jo decided to “film a new full-length movie in the spring,” saying that a film is waiting for him from far away. It will revolve around two friends on a day before they head for a school trip.

When asked what he dreams of, he says that he wishes to create a new wave in the film industry.

“In my 20’s I was very ambitious because I truly desired to be something. I also hated the suffocating world often portrayed in comedies.”

Jo continued, “It seemed that the world, today’s films, as well as myself have all halted at one place. From now on, I’m planning to honestly portray how I feel, whether it be through acting or directing. Just like that, I want to create a new wave in the film industry.”