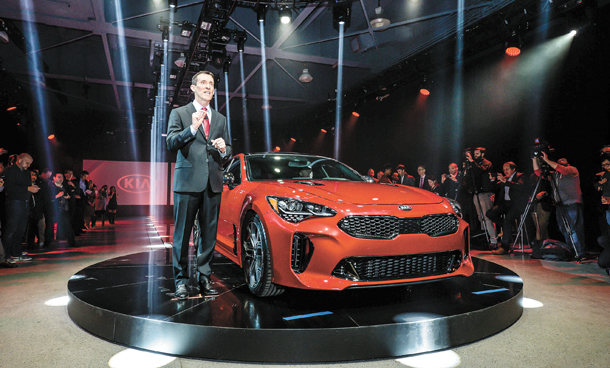 The North American International Auto Show, the earliest of the large-scale auto shows to open during the year, kicked off in Detroit with more than 30 global automakers releasing new cars. Kia Motors is hoping to capture the spotlight by unveiling its fastest sedan.

The only Korean automaker to showcase a new car at the show, Kia unveiled Stinger, a sports sedan based on the concept car GT that was introduced at 2011’s Frankfurt Motor Show. The five-door fastback sedan, whose roofline slopes down in the rear and comes without a separate trunk, is the fastest car made by Kia and is able to reach 100 kilometers an hour in 5.1 seconds.

The design was overseen by one of the most recognized car designers in the world, Peter Schreyer, an alumnis of Audi, currently heading Kia’s design office. Albert Biermann is head of vehicle test and high performance development.

“I think for the Kia brand, the Stinger is like a special event,” said Biermann, who joined Kia in 2014 from the BMW M performance division, which created the M3 and M5 sports cars. “Because nobody expects such a car, not just the way it looks but also the way it drives. It’s a whole different animal.”

At 114.4 inches, the Stinger’s wheelbase is longer than competitors Audi A4, Infiniti Q50, Lexus IS, BMW 4 Gran Coupe, the Lexus GS and Mercedes CLS. “It’s also longer overall and wider than others in the segment, allowing for spacious accommodations,” Kia said in a statement on Monday.

The model is planned for sale in the U.S. late this year. In domestic markets, it is scheduled for release in the first half of the year.

Among other players, BMW unveiled the first changes to the 5 series in seven years. Mercedes-Benz is introducing its new E-Class Coupe while Toyota is rolling out its 2018 model of flagship Camry sedan.

The Consumer Electronics Show, the world’s largest IT and home appliances exhibition that ended Sunday, took away some of the interest of automakers vying to show off their recent developments in autonomous driving and greener car production in the Motor City. A number of luxury carmakers like Porsche, Jaguar, Land Rover and Tesla are skipping Detroit and saving their energy for shows held later in the year.

Still, to embrace the fast-growing IT part of the auto business, the North American International Auto Show set up an affiliated exhibit AutoMobili-D for the first time. It focuses on five key areas: autonomous driving, connected car technologies, e-mobility, mobility services and urban mobility. IT giants such as Google, IBM and Siemens along with 50 burgeoning start-ups will participate in the events.

“Just as [the Detroit auto show] has served as the leading global venue for automakers to debut brand-defining vehicles, AutoMobili-D will be the go-to setting for automakers, suppliers and start-ups alike to unveil advanced technologies and initiatives that will move the transportation industry into the next century,” said the show’s Chairman, Sam Slaughter.

In the meantime, one of nation’s leading battery makers, Samsung SDI, is joining the auto show with its high-energy density battery cell, which enables cars to travel up to 500 kilometers on a fast charge of 20 minutes and 600 kilometers on a full charge. On a supercharger which charges faster, the battery is charged up to 80 percent of full capacity.

The company said mass production of the batteries will be available in 2021.

According to industry comparisons from Samsung SDI, Tesla’s Model S moves 130 miles per 20 minute supercharge and the Model X moves 115 miles on a 20-minute supercharge. For a full 300 miles - which both car boasts as a maximum driving range - more than an hour of charging is required. 