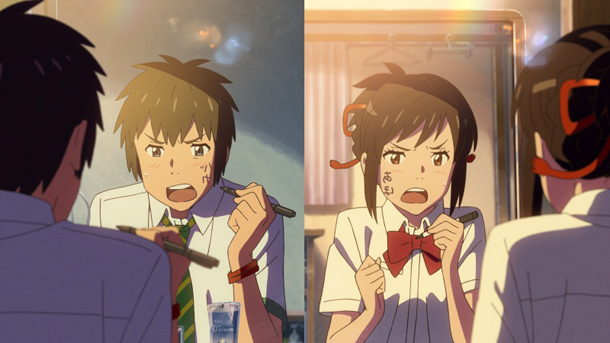 The long-awaited “Your Name” ruled Korea’s box office over the weekend, reaching a total of one million tickets including preview sales. [MEDIA CASTLE]

The highly anticipated “Your Name” was the winner at the local box office over the weekend, according to the Korean Film Council on Monday.

Helmed by director Makoto Shinkai, who many have deemed the next Hayao Miyazaki (of “Spirted Away”), “Your Name” racked up 7.06 billion won ($6,310,000) through 837,000 tickets, in its first weekend. Including tickets sold last weekend during previews before its official release, the animated film has sold 1.18 million tickets thus far.

The dreamy Japanese drama about missed connections involving young star-crossed lovers has earned accolades in a number of countries, including Japan, where it topped the box office for 12 weekends, and China, where it has become the highest-grossing Japanese movie ever in the country.

Local action flick “Master” slipped to the second spot in its third weekend. It sold 562,000 admissions from Friday to Sunday, adding up to a total 6.51 million tickets sold. Although some insiders expected “Master” to become the first movie to hit the 10 million mark this year, that hope has faded amid the appearance of a strong competitor.

The adventure drama “Passengers” finished the weekend in third. Despite the star power of Jennifer Lawrence and Chris Pratt, who even visited Korea to promote their movie, the film has had a disappointing performance. It sold 351,000 tickets on its debut weekend, making its combined total add up to 504,000. The possibility of “Passengers” climbing up the chart seems weak with the release of new strong movies next week such as Disney’s “Moana.”

The top three films accounted for some 65 percent of business over the weekend, with “Your Name” taking up 31.4 percent.

Illumination’s animated musical “Sing” landed in fourth, and was followed by the Russian animated adventure “The Snow Queen 3: Fire and Ice.”

Local comedy “Because I Love You” climbed up two spots to hit sixth while “La La Land” dropped three spots to seventh.

“Rogue One: A Star Wars Story” came in eighth, a steep drop from last weekend’s second. Despite its success in North America, the newest Star Wars series has failed to interest local moviegoers.

Disaster film “Pandora” came in ninth, and local R-rated drama “Misbehavior” rounded out the weekend in the tenth spot.