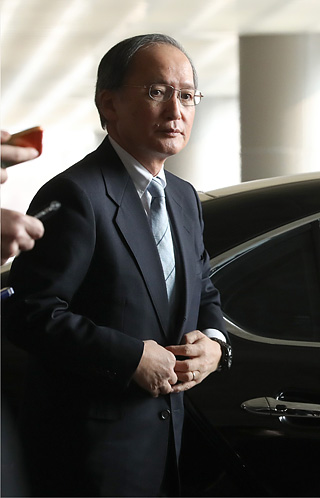 Yasumasa Nagamine, Japanese ambassador to Seoul, walks into the departure terminal of Gimpo International Airport, western Seoul, on Monday to fly to Tokyo after the Japanese government announced Friday it would temporarily recall its top envoy. [WOO SANG-JO]

Relations between Korea and Japan are turning sour as Tokyo retaliates against the installation of a statue representing victims of Japan’s wartime sexual slavery near its consulate in Busan - and each country’s domestic political climate is not helping the diplomatic situation.

On Monday, Japanese Ambassador to Korea Yasumasa Nagamine and Yasuhiro Morimoto, the consul general in Busan, returned to Tokyo after the Japanese government announced Friday it would temporarily recall the top diplomats.

This was part of Japan’s protest of the installation of a monument in Busan at the end of last year which represents the young women who were forced into sexual slavery by the Imperial Japanese Army before and during World War II, euphemistically referred to as comfort women.

Nagamine, speaking to reporters before he departed from Gimpo International Airport, expressed “regret” for the installation of the comfort woman statue, adding, “I will temporarily return to Japan and talk to related officials about this.”

This bronze statue in Busan is similar to the iconic Peace Monument that has sat across from the Japanese Embassy in central Seoul since 2011, which has become an international symbol of Japan’s brutal wartime sexual slavery. The new statue was installed by a Busan-based civic organization and built with 8.5 million won ($7,050) from public donations.

This civic organization attempted to install the comfort woman statue in a surprise move on Dec. 28, to coincide with the one-year anniversary of the Korea-Japan agreement to resolve the issue, despite the fact that it did not have a permit from the local district.

The district office and police initially removed and confiscated the statue, but restored it to its location near the back gate of the Japanese consulate in Dong District, Busan, two days later, following a public outcry over its removal.

Tokyo is demanding the statues’ removal. It suspended bilateral currency swap talks and postponed high-level economic cooperation talks with Korea, and ordered its diplomats in Busan not to attend any public events related to the city.

Nagamine was summoned Friday by Korean Foreign Minister Yun Byung-se, who expressed regret over Japan’s latest measures, urging the issue to be resolved through “bilateral trust.”

This marks the first time Tokyo has recalled a top diplomat since President Lee Myung-bak’s landmark visit to the Dokdo islets, called Takeshima by Japan, in the East Sea in August 2012.

The Japanese ambassador and consul general are expected to report to Prime Minister Shinzo Abe and their foreign minister on the situation. The duration of their temporary recall has not been announced yet.

Renewed bilateral friction comes amid a leadership vacuum in Korea following the impeachment of President Park Geun-hye last month and continuing public disgruntlement over the ambiguous nature of the breakthrough agreement between Korea and Japan over the comfort women issue. 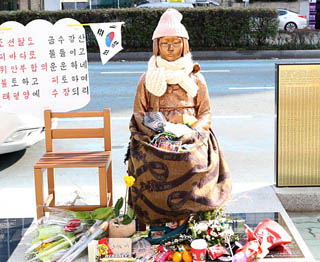 A new statue representing victims of Japan’s wartime sexual slavery sits near the Japanese Consulate in Busan on Monday. People placed flowers and presents at the foot of the statue.[YONHAP

The “final and irreversible” deal struck by the Korean and Japanese foreign ministries on Dec. 28, 2015, was intended to end the long-running diplomatic battle over the comfort women by agreeing to a Japanese government's apology and a multimillion-dollar fund for the victims.

They especially felt betrayed over the mention of the sensitive issue of the removal of the Seoul comfort woman statue in a final joint statement by Japanese Foreign Minister Kishida and Korean Foreign Minister Yun announced on Dec. 28.

Under the deal, the Korean government “acknowledges” that Japan is concerned about the statue in front of the Japanese Embassy in Seoul and will strive to “solve the issue in an appropriate manner.” The Korean government said it will “consult with related organizations” to address the issue.

The Japanese government has insisted that it has kept its part of the agreement by paying the 1 billion yen and that Seoul needs to remove the comfort woman statue because it disturbs the peace of the mission and impairs its dignity.

The Korean Foreign Ministry maintains that any decision to remove the statue is up to the private civic organizations that installed it.

Korea last July set up a foundation with 1 billion yen ($8.6 million) transferred by the Japanese government to support the victims.

Japanese Foreign Minister Fumio Kishida told reporters during a visit to the Czech Republic Sunday, “The comfort women agreement is highly regarded by many countries around the world.” He then expressed regret over the installation of the monument near its Busan consulate.

“Japan and Korea have the responsibility to implement the agreement,” Kishida continued. “Japan has implemented the agreement, so we request that now Korea should carry out the agreement faithfully, including the statue issue.”

The Shinzo Abe administration is expected to use the removal of the comfort women statues in Korea as a political card to gain right-wing support domestically.

Prime Minister Abe has faced setbacks in dealing with U.S. President-elect Donald J. Trump and Russian President Vladimir Putin. Abe met with Trump in November in New York but made little headway in earning the incoming U.S. president’s backing of the Trans-Pacific Partnership (TPP) trade deal, which would be meaningless without Washington’s support. Abe was not able to make a breakthrough on a territorial dispute with Russia over the Kuril islands in a summit meeting with Putin in December in Tokyo.

Abe said on an NHK program recorded on Friday and broadcast Sunday, “Even if the Korean government changes, the Korea-Japan comfort women agreement must be carried out. It is a matter of trust between countries.

“Korea has to show its sincerity,” he added. “Japan carried out its tasks faithfully and paid 1 billion yen.”

“There is starting to be criticism amongst the conservatives, his main supporters, over Prime Minister Abe’s failed summit diplomacy,” a foreign affairs source here said. “And in the midst of this, the comfort woman statue issue, something the Japanese right-wingers have loathed, came up, and Prime Minister Abe, taking into consideration his supporters, has to come down hard on that.”

Abe in a phone conversation with U.S. Vice President Joe Biden Friday emphasized that it is important for Korea-Japan agreement to be implemented faithfully and that it would not be constructive to turn back the deal, according to the Japanese government.

“It appears Biden put the focus on expressing strong concerns over Japan’s strong measures such as suspending the bilateral currency swap talks and recalling its diplomats,” a Korean foreign affairs official said.

Opposition lawmakers have shot back against statements from Japan calling for the removal of the statues.

Woo Sang-ho, floor leader of the Minjoo Party of Korea, said Monday during a supreme council meeting at the National Assembly that Korea should give back the 1 billion yen to Japan to shoot down such claims.

“Should the people have to live in shame because of 1 billion yen?” said Woo. “If we do not have enough money, the National Assembly can raise reserve funds, so we need to return the 1 billion yen quickly.”

Former UN Secretary General Ban Ki-moon said the agreement between the two countries “should not be the end of the process of [finding a solution to the issue of Japan’s wartime sexual slavery], nor can it be the end.”

Ban, who is expected to return to Korea Thursday amid expectations he will make a presidential bid, said in an interview with the JoongAng Ilbo and JTBC, “It is important to continue to take substantive measures in order to alleviate the victims’ pain and console them.”

“In order to lift the burden on the next government, we need to accurately figure out what Japan’s aim is and respond strongly diplomatically,” Choi Kang, vice president of the Asan Institute for Policy Studies, told the JoongAng Ilbo Monday.

“We need to develop the logic that it is difficult to regulate civic organizations’ autonomous activities through law.”

The Seoul Administrative Court ruled Friday that the Korean Ministry of Foreign Affairs must make public some parts of the negotiation records on the 2015 agreement between Seoul and Tokyo to settle the comfort women issue.

The court ruled in favor of the Lawyers for Democracy and ordered the Foreign Ministry to make public documents related to the deal, which was sealed after a dozen rounds of working level negotiations held in Seoul and Tokyo since April 2014.