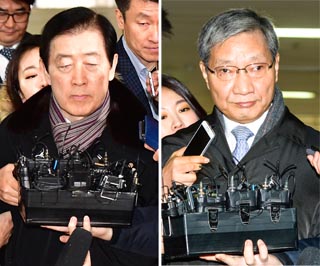 Top executives of the Samsung Group were grilled by investigators of the independent counsel team on Monday over the conglomerate’s alleged bribing of President Park Geun-hye through her friend, Choi Soon-sil.

In a press briefing, Lee Kyu-chul, assistant independent counsel, did not rule out the possibility that detention warrants may be sought to further hold Choi and Chang. He also said the two executives may face cross-examination, if necessary.

Lee said on Sunday that they would be summoned as witnesses, but their status could be changed to that of suspects.

The team has been looking into the political scandal involving Park, Choi and conglomerates, which led to the impeachment of the president in December. Their target was the allegation that Park pressured the state-run National Pension Service to support a controversial merger of Samsung Group’s two units in 2015 in return for the conglomerate’s generous support of Choi and her family.

Samsung sponsored Choi’s daughter’s equestrian training. It also made massive donations to the two nonprofit foundations that Choi practically controlled in return for the merger between Samsung C&T and Cheil Industries. The deal allowed the generational ownership transfer of Samsung by solidifying heir apparent Lee Jae-yong’s grip on Samsung Electronics. The pension fund was the largest shareholder of Samsung C&T at the time.

Moon Hyung-pyo, former health and welfare minister, was already arrested last month for his influence over the pension fund’s decision.

Samsung was also accused of supporting a winter sports education program operated by Choi’s nephew in return for support of the merger.

If Park is indicted and convicted of the third-party bribery charge, she will face at least five years in prison or, in the worst-case scenario, life, depending on the amount of money involved.

The independent counsel team was to grill the two Samsung executives about the conspicuous timing of the conglomerate’s decisions to support Choi’s daughter and nephew. Samsung funded them shortly after Park’s one-on-one meetings with Samsung Vice Chairman Lee in July 2015 and last February.

At the National Assembly hearing on Dec. 9, 2016, Lee said he did not discuss the merger or making of donations when he had exclusive meetings with Park. The independent counsel team suspects this testimony to be an act of perjury.

The independent counsel said it has no plan, as of Monday, to summon Lee. He has been barred from leaving the country, along with other Samsung executives. Other tycoons, including the SK and Lotte chairmen, were also banned from leaving Korea.

The independent counsel also summoned Choi Soon-sil for questioning, but she once again refused to appear. Choi said she had to prepare for her own criminal trial and Park’s impeachment trial and refused to show up for Monday afternoon’s questioning.

Choi was scheduled to be questioned as a witness today at the Constitutional Court’s impeachment trial of President Park. On Wednesday, she will attend the hearing of her criminal trial at the Seoul Central District Court.

The Constitutional Court, however, said Monday that Choi notified the court she will not attend because of her criminal trial.

Choi was questioned by the independent counsel on Dec. 24, 2016. Since then, she has repeatedly rejected the team’s summons.

Assistant Independent Counsel Lee said it will allow Choi some more time to attend the questioning. If she continues to refuse, the team will seek a detention warrant, he said.