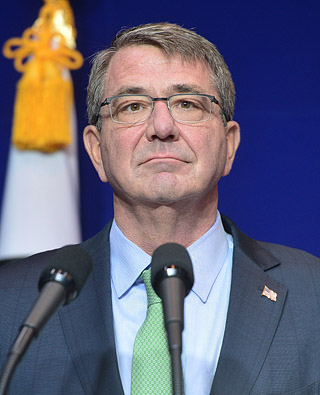 U.S. Defense Secretary Ashton B. Carter said Washington would shoot down an intermediate-range ballistic missile test-fired by North Korea if it heads toward the United States or its allies.

The statement was made Sunday Washington time during an interview with NBC’s “Meet the Press.”

“If it were coming - if it were threatening to us, yes. That is, if it’s predicted impact or one of our friends or allies, yes, we would shoot it down,” Carter answered when asked by an NBC reporter about the hypothesized situation, according to transcripts provided online by the broadcaster.

Asked whether the U.S. would shoot down a missile fired into the ocean, Carter said: “We only would … shoot them down, and that is use an interceptive for that purpose, if it was threatening. That is, if it were coming towards our territory or the territory of our friends and allies.”

“We’re ready to defend the Korean Peninsula and our friends and interests there,” said the defense secretary, adding that it was the Pentagon’s job to “stay one step ahead of the North Koreans.”

Pyongyang’s nuclear weapons and ballistic missile defense programs are a “serious threat” to us, Carter said, and Washington tries to stay ahead of its missile defenses “to make sure we’ve upgraded their number, their type, so that we’re sure we can defend ourselves.”

Carter’s remarks were made just after Pyongyang announced through its official Korean Central News Agency on Sunday Seoul time that North Korea will fire an intercontinental ballistic missile “any time, any where” its leader Kim Jong-un wishes, backing up an earlier claim on Jan. 1 that it was “in its final stages” of test-firing a missile that can reach American territory.

U.S. President-elect Donald J. Trump downplayed any possibility that the North would actually follow through with the provocation, writing on his official Facebook page on Jan. 3, “It won’t happen!”

Jeong Joon-hee, South Korean spokesman for the Ministry of Unification, said Monday during a regular press briefing that it appears the North is trying to exert pressure on the incoming Trump administration to see if it will take a different stance from the policy of President Obama, who refused any direct dialogue with Kim Jong-un outside the six party talks with China, Japan, Russia and South Korea.

The South has yet to detect any signs that the communist regime is preparing a missile launch, according to Jeong.

During an interview with the North Korean broadcaster, an unnamed official from the North’s Ministry of Foreign Affairs warned Sunday that the U.S. “will have to embrace a new mindset” about Pyongyang, considering that it’s developing hydrogen bombs and nuclear warheads capable of being mounted on ballistic rockets.

While U.S. and South Korean intelligence authorities do admit that the North has made significant progress in nuclear miniaturization, both sides agree that it doesn’t seem capable yet to fire an intercontinental ballistic missile that can reach American territory.