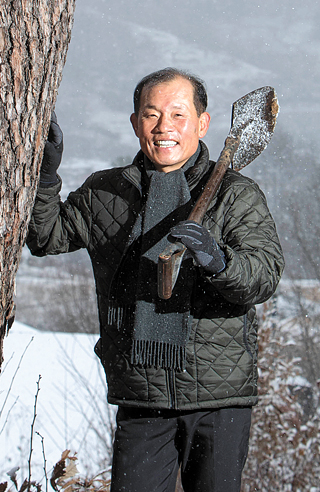 Kim Woong returned to the countryside in 2013 after spending 30 years in an office, “To live on a mountain, it is necessary for one to exhaustively prepare,” he said. [OH JONG-CHAN]

A heavy blanket of snow covered the mountain overlooking the village of Bunam in Muju County, North Jeolla, on Dec. 23, where the home of Kim Woong, 62, sat among the pines and chestnut trees.

The car ride from Muju Terminal took about 20 minutes up a mountain road. Though it was below freezing, Kim checked on the shiitake mushrooms in the vinyl greenhouse as soon as he arrived home, skillfully clearing the trees adjacent to his home with an excavator.

Kim looks as if he has lived all his life here, but this is only his fourth year as a mountain resident.

Six years ago, he was a director at KT, the largest telecommunication provider in Korea. Starting as a civil servant in the postal service in 1978, he worked at KT, formerly Korea Telecom, for 30 years.

Leaving the company in 2010, he acted as vice-president of a small-medium-sized enterprise IT company. Kim finally came to Muju in 2013, and though it seemed an abrupt decision, it was in fact a matter he had contemplated for some time.

“At some point, I asked myself, ‘Am I doing the work I want to do?’” said Kim. “As an office worker, I worked passionately and was satisfied, but I thought it was a far cry from what I truly wanted to do.”

The happiness he found was in nature. He arranged for around a 1,000 square-meter (10,764 square-foot) plot in Icheon, Gyeonggi, and fell in love with farming there, cultivating trees and vegetables. Kim attended Korea National College of Agriculture and Fisheries’ Preliminary Farming School to prepare.

His first thought was not to settle down on a mountain. “After deciding to return to the country,” he said, “I went around my hometown of Goheung, South Jeolla, to Boryeong, South Chungheong and ten or so places in all of Chungcheong and Jeolla.”

Introduced to Bunam by chance, Kim thought it the perfect place for him to do what Koreans refer to as guinong, “return to farming,” or answer the call of the wild. Kim harnessed compost, rice straw and microorganisms with the intention of practicing organic farming.

He also appreciated the location’s proximity to the highway, and the fact that it was just one hour from Daejeon. “Muju’s ratio of mountains, 83 percent, is the highest of all cities and counties nationwide,” said Kim. “Using the forest resources, I saw the possibility of growth.”

He established living accommodations over the course of a year, funding his project by selling his apartment in Yongin, Gyeonggi, and using his KT-retirement allowance of 300 million won ($249,000).

Pouring through the Muju area mountain’s information on the forest and soil conditions, he researched which items would be best to cultivate. He received support from the Korea Forestry Promotion Institute’s (Kofpi) Forest In-Call Center and Everything About Forests system.

After planting sources of nectar for honey gathering, Kim embraced apiculture, and even released pigs and chickens in the mountain to rear. “It isn’t just gathering from spring to fall, I also dig up arrowroot,” Kim said. “I earn money from the mountain throughout the year.”

Kim’s income this year was around 30 million won ($24,840). “It hasn’t been long since it was profitable and I began to have a steady income,” Kim said. Last year, Kim established an agricultural corporation named Pygmalion Herb. He founded the corporation as a social enterprise to introduce the plants of Muju and many other regions’ produce.

People like Kim, who dream of taking up farming and fishing, are growing in number.

According to the Korea Forest Service, the population of mountain residents has continuously increased, with 9,557 persons in 2010, 12,376 in 2011 and 12,937 in 2012. The criteria on relevant statistics of mountain residents was altered in 2013, and now includes all who “return to the land.”

“Returning to the land” is particularly attractive to semi-retired people like Kim. Forest resources are abundant and one can breathe the fresh air and take care of their health. Popular television programming featuring middle-aged men living in the forest have become popular. There is an economic advantage, too, as the cost of mountain living is no more than 10-20 percent of the cost of typical farmland living. One reason for this is the cost of pesticides and fertilizer used in farming.

In the past, a mountain village’s source of income mostly came from the lumber industry. But nowadays, the cultivation of medicinal and food products is also a viable means of income. One can cultivate omija, mushrooms, deodeok, bracken or high-income fruits such as apricots.

But if one doesn’t prepare properly, the chore of mountain life can be far more bitter compared to farming or fishing. “One can’t simply pitch a tent or raise a mud hut and go hunting,” Kim said. “More than farming or fishing, the environment of the mountain may be coarse and arranging a means of making an income is more important.”

While preparing for his “return,” the person Kim is most grateful for is his wife, Park Hong-soon. She did not immediately enjoy the rustic life, and went to Muju one year earlier than Kim, where she worked as a caregiver for the Muju Welfare Center. Kim, too, became a valued community member. He actively acted as the Muju Return to Farm and Rural Association vice-president after first starting as a mountain fire lookout.

“In a mountain village with few residents, one needs their neighbors’ help more than in farming villages,” said Kim. “One has to develop close relationships in a humble manner.”