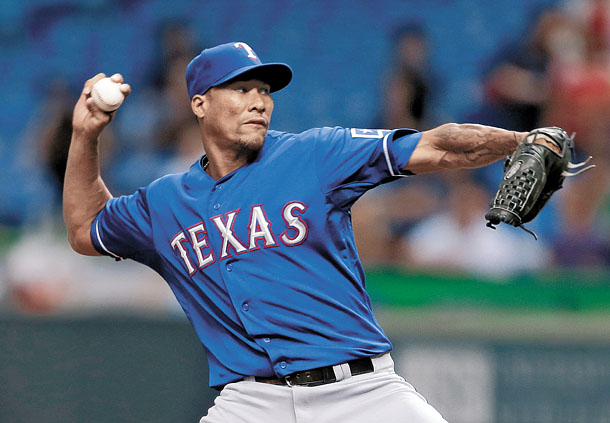 The Korea Baseball Organization (KBO) club inked the Dominican right-hander to a one-year contract worth $1.8 million. Ogando becomes the second highest-paid foreign player in the KBO after former Eagles pitcher Esmil Rogers, who got a $1.9 million deal last year.

Ogando made his big league debut with the Texas Rangers in 2010 and went on to play for the Boston Red Sox and the Atlanta Braves. He has made 283 major league appearances, compiling a 33-18 record with a 3.47 ERA.

The Eagles, finishing seventh in the 10-team league last year, said Ogando throws a fastball clocking at around 150 kph (93.2 mph) using his 193-centimeter height and mixes it with sliders, changeups and curves.

Ogando posted an ERA below 4.00 in his Major League Baseball seasons, except in 2014. He also has a walks and hits per innings pitched (WHIP) of 1.59 and 7.28 strikeouts per nine innings.

The KBO clubs are each allowed to carry a maximum three foreign players, and at least one must be a position player.