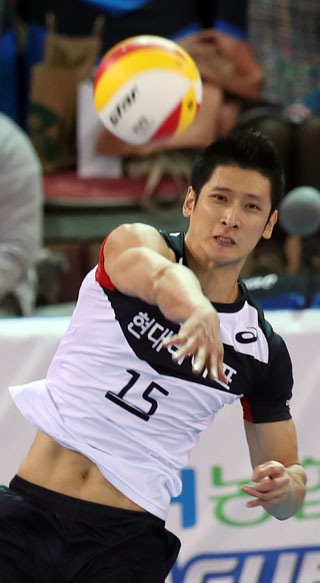 Moon Sung-min, opposite spiker for the Hyundai Capital Skywalkers, says that executing maximum concentration in a split second is the secret to a good serve. [YONHAP]

Volleyball is a game that commences with a “one, two, three!” One is receiving the serve, two is when the setter tosses and three is when the hitter finishes with a spike. One can still score at “one” in volleyball. In the professional V League, there is a player that incapacitates the opponent across the court with an “artillery shell.”

The athlete that comes to mind is Moon Sung-min, opposite spiker for the Hyundai Capital Skywalkers.

In 1998, in lieu of side-out scoring (scoring only possible by the serving side), the current rally point scoring system (scoring possible regardless of possession) was introduced. Having possession of the serve became a sort of handicap as there was equal opportunity to score. To overcome this, the spike serve appeared.

The prowess of Moon’s serve was well-regarded since his time in college. While attending Kyonggi University in 2008, Moon battled in the World League and overpowered the world’s strongest servers.

While contending in the V League All Star Game Server King Contest, he claimed first place twice. Moon was center stage with his top record of a serving speed at 122 kilometers per hour (76 miles per hour) in the 2012-13 season.

Moon’s serving power remained unchanged this season. In the previous season, his service ace per set faltered somewhat at 0.293 at fifth place, however, in this season he rose to second place in the league with 0.512.

He is in the middle of the pack, competing with the top-ranked Mitja Gasparini at 0.590 playing for the Korean Air Jumbos and Krisztian Padar with a score of 0.494 at the Woori Card Wibee. On Dec. 21, Moon reached a personal milestone of 200 serve points (217 as of Monday).

What’s the secret behind Moon?

First, the ball is thrown in the air for a serve, or a toss. “The [importance] of the toss is over 90 percent,” said Moon. “Once the feeling of having done a good toss comes, you can hit it without any concerns. While I don’t practice only the toss, one has to be most concerned of the toss in serving practice.”

Three years ago, he invited the now retired rhythmic gymnast, Shin Soo-ji, 25, and learned a few tricks. In a rhythmic gymnastics ball routine, throwing a ball at the exact height with exact timing is essential.

Unlike others, Moon raises his toss five meters in the air and as a result he is able to invest more power into it.

Moon’s serve is not just powerful, his accuracy is top-notch. His hitting errors this season is just 17.8 percent compared to Gaspirini’s 29.2 percent and Padar’s 27.5 percent. The source of his accuracy stems from routine.

To deliver a serve, Moon’s routine consists of two parts. First, he practices moving into the serving zone for his serve. Second, he raises his right arm to his shoulder to entrain the motion.

“[Whether] the number of steps or breathes [taken to go] to the serving zone, I always have the same detailed movements,” explained Moon. “That way, I can have room to spare and make a good serve.”

In order to disrupt Moon’s rhythm, his opponents yell out before his serve. “On a good day, it doesn’t even matter if the flow is disrupted,” said Moon. “When my condition is poor, instead of a powerful serve, I change to floater serves. When I prepare to do a serve, the opposite players often step back behind and the floater [serve] can also be effective.”

After Choi Tae-woong was appointed head coach of Hyundai Capital last season, the motto he aimed for was “up tempo 1.0” and “speed volleyball.” Through intense and fast games, the team recorded 18 consecutive victories in the latter half of the season and climbed to first place in the regular season.

However, in the championship finals they lost to OK Savings Bank and were the runner-up. In the current season with the now “up tempo 2.0,” Hyundai Capital is first place in the V League rankings as of Monday. Having debuted in the 2010-11 season, Moon has yet to bring back a championship cup to Hyundai Capital.

“In the last season, I received the fans’ love often and the results were good too,” said Moon. However, because we lost at the end, I was upset. For this season, I will for sure not lose the chance [for the championship].”