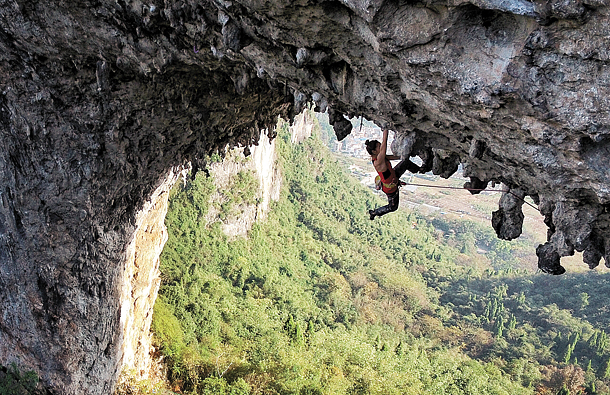 Sport climber Kim Ja-in scales a crag in Yangshuo, Guangxi Province, in southern China last year. Depending on only one rope, she is free climbing the most difficult course. Kim is now preparing for the 2020 Tokyo Summer Olympics. [ALL THAT SPORTS]

Last month, the 29-year-old climber Kim Ja-in “flashed,” or completed in one attempt, the 35-meter (115-foot) route “China Climb” in Yangshuo County, Guangxi province, southern China - a first in the world for women.

Kim, also known as Jain Kim, followed that up by climbing the “Spicy Noodle” route in two attempts. “China Climb” is a 5.14b route, while “Spicy Noodle” is a 5.14c, according to the Yosemite Decimal System, which defines Class 1 as an easy hiking trail. Starting at 5, the level of difficulty increases by increments of 0.1 up to 5.15. The world’s first 5.15c, the highest level on the scale, is “Change” in Norway and was completed by Adam Ondra in 2016.

A reporter from the JoongAng Ilbo, an affiliate of the Korea JoongAng Daily, interviewed Kim at The Ja’s Climbing Gym in Gangnam, Seoul, on Thursday.

“Though it was as high as a ten-story building, I wasn’t scared,” said Kim. “When I’m climbing, it feels as though my body becomes one with the wall.”

Kim is a sport climbing pioneer. In a first for a Korean, she is the three-time champion of the International Federation of Sport Climbing (IFSC) World Agility Championship for lead climbing, winning in 2010, 2013 and 2014. She was the overall champion is 2015. In lead climbing, one competes to climb the highest on a 15-meter artificial rock wall within six to eight minutes. Europe’s television commentators have nicknamed Kim the “Climbing Ballerina” due to her grace and beauty.

Kim’s father, a mountaineer, named her Ja-in, a portmanteau of the Korean word for climbing rope, jail, and Insu Peak. “When I was in elementary school, I was so scared of heights I would cry,” Kim said. “It was difficult at first, but after working hard, the panic disappeared. Someone who’s never tried [climbing] would never know the sensation of becoming one with the wall.”

To be successful in lead climbing, it helps to have long limbs. At 153 centimeters (5 feet) and 43 kilograms (95 pounds), Kim overcame this physical disadvantage through effort. “A tall climber can grab a hold, an artificial outcropping, in one try,” said Kim. “Even when I stretched my arms and legs out, I couldn’t grab a hold and had to jump. That’s why I wear shoes 20 millimeters smaller [for the grip].” She said, “After grabbing onto a hold countless times, my fingerprints disappeared.”

As a result, the fingerprint scanner at the airport immigration desk fails to work for her.

Though people now call her the “Rock Empress” or “Climbing Ballerina,” Kim’s childhood nickname was “647.” While climbing, if she fell her coach would have her do 100 penalty exercises. One day, she fell 10 times, and on her 647th repetition, she burst out crying. All her training has paid off, though.

“When I was young,” she said, “adults would joke ‘your shoulders are so wide, so you won’t get married.’ I cried a lot, but thankfully I did get married.”

Kim married a firefighter named Oh Yeong-hwan in December 2015. “When my husband was employed at the Korean mountain rescue team,” she said, “I met him for the first time at an indoor rock climbing wall. He helped me when my right knee’s cruciate ligament snapped and I had to get surgery. My husband, who placed fifth in the firefighter climbing competition, holds onto the line when I go up high walls. When I compete in international competitions, he writes a handwritten letter saying, ‘Don’t worry and enjoy the climb.’”

To help popularize climbing, Kim scaled an 84-meter building in the heart of Myeongdong, central Seoul. “In middle school, my friend and I would divide first and second place between us in climbing competitions,” she said, “but now the number of competitors has increased. As with the number of figure skating athletes increasing due to Kim Yuna, I feel proud that people are trying out climbing after seeing me.”

Sport climbing was adopted for the 2020 Tokyo Summer Olympics as an official event. Points from bouldering, in which one must scale five-meter walls, speed climbing, where one competes to scale 10-15-meter walls for time, and lead climbing, will be tallied to determine the winners of the combined sport climbing event. For a lead climbing specialist such as Kim, it will be important to train for bouldering and speed.

“Since sport climbing became an official Olympic event, there are many who hope I will win a medal,” said Kim. “I will be 32-years-old. Before anything else, my goal is to receive Olympic qualification. While doing my best, I’ll enjoy climbing.”