A letter to Obama

A letter to Obama 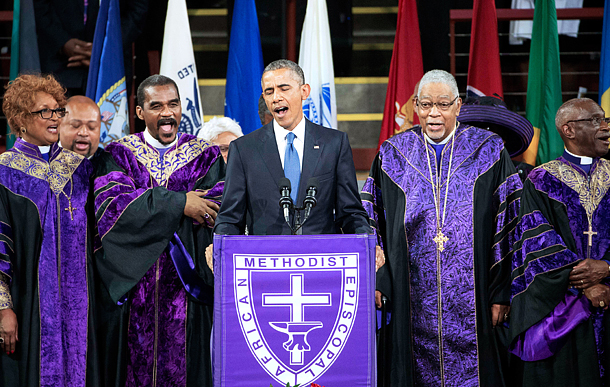 President Barack Obama sings “Amazing Grace” during services honoring the life of the Rev. Clementa Pinckney in June 2015, in Charleston, South Carolina. Pinckney, a state senator and a pastor, was one of nine people assassinated in a shooting at Mother Emanuel AME Church. [AP/YONHAP]

I am writing from a cafe on the second floor of Trump Tower. In 10 days, the owner of this building will succeed you to serve as the President of the United States. I still remember a day eight years ago. I was deeply moved when I saw you on CNN on Jan. 17, 2009, three days before the inauguration.

Crowds gathered along the train track to see you on the train from Philadelphia to Washington D.C. It was a bitterly cold day. The first station stop was Wilmington, Delaware, and the crowd, which started to gather around 4 a.m., sang “Happy Birthday” to Michelle Obama, the new first lady. Children and seniors were hand in hand and welcomed you. As the train stopped at Baltimore Station, more than 40,000 people gathered. I still remember a white lady and a black lady crying together. The tears on their cheeks were so brilliant and precious.

Not many presidents have accomplished so much without a scandal for eight years in the White House. The economic growth rate improved from negative 6.2 percent in the fourth quarter of 2008 to 3 percent, and 15.6 million jobs have been created. Thanks to Obamacare, an additional 20 million adults and 3 million children have medical coverage. This is something that seven previous presidents attempted but to no avail.

The number of U.S. troops in Afghanistan and Iraq has been downsized from 175,000 in January 2009 to 15,000. You made peace with formerly hostile nations like Iran and Cuba. It is regrettable that the relationship with North Korea hasn’t improved.

Your words and writings contain philosophy. “Tonight, we proved once more that the true strength of our nation comes not from the might of our arms or the scale of our wealth, but from the enduring power of our ideals: democracy, liberty, opportunity and unyielding hope,”

you said in a speech given at a rally right after winning the election. It is the most impressive and significant comment that moved even the Republicans. You have accurate and correct messages that reverberate. Ambiguous, immature speech does not have such power.

Moreover, you put what sociologist Charles Cooley said — “Leadership appears when one approaches those with different ideas.” — into action. You showed the values that people should aspire to follow as your actions are based on philosophy and conviction.

When racial discord climaxed in May 2015, you attended the funeral of a black pastor and senator assassinated in a church shooting by a young white man. But you did not blame the racist, white supremacists. You lowered your head and had a moment of silence. Then you started to sing “Amazing Grace.” “Amazing grace! How sweet the sound. That saved a wretch like me…” There was no accompaniment, and you were a bit off-key. But 6,000 people attending the funeral stood up and sang together. Their faces were filled with hope and love rather than anger and frustration. It was a moment when Americans rediscovered what kind of nation America is. I thought you showed what a leader should be. If Americans took a gamble by electing a black man as the president of their country eight years ago, it was a great bet.

“As we look ahead to the future, I wanted to take a moment to look back on the remarkable progress that you made possible these past eight years. It’s been the privilege of my life to serve as your president.” This sums up your leadership. When can we Koreans have such a president?

I look forward to your farewell speech in your hometown of Chicago more than I do the inauguration speech of the new resident of the White House.

Fifty-four years ago, Dr. Martin Luther King, Jr. asked if America could become truly great. Eight years ago I believed it could. Now, I am not so confident.


*The author is Washington bureau chief of the JoongAng Ilbo.