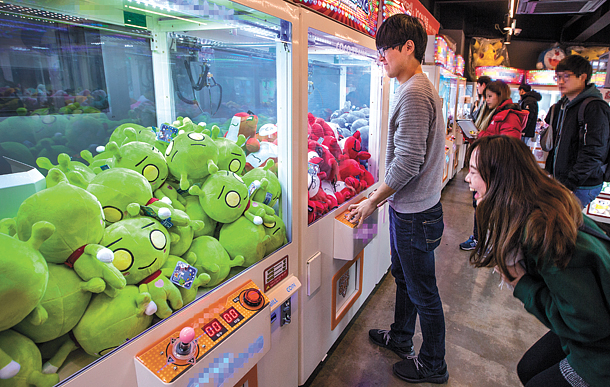 A university student nervously attempts pulling out a doll at a claw machine store in Hongdae, western Seoul, while his friend excitedly roots for him to get lucky. He managed to pull out the red-colored doll, pictured below, by trying some 20 times. [PARK SANG-MOON]

Towards the end of 2016, a pattern of peculiar incidents made headlines. In October, a woman in her 20s had to be rescued by paramedics in Incheon after she climbed inside a claw machine through its narrow slot, which was about 30cm (12 inches) wide, to retrieve a stuffed character that she failed to grab. Although she was intoxicated, that didn’t rationalize her bizarre behavior. In December, the same incident happened in Cheongju, North Chungcheong. Except this time, it was a group of elementary school students who found themselves stuck.

Although claw machines may seem like old fashioned arcade games from decades ago, they have recently been springing up all over Korea, especially in neighborhoods such as Hongdae and Sinchon in western Seoul, where a number of universities are located. This time around, the attractions are dominating on a much larger scale - spaces filled with a number of claw machines have quickly been created, in contrast to the past, when only one or two machines were installed sporadically throughout neighborhoods.

In fact, the number of stores that run claw machines total around 500 nationwide as of November, according to Kim Gyeong-seok from Game Rating and Administration Committee (GRAC), a public organization affiliated with the Ministry of Culture, Sports and Tourism. This is a stark increase from the 21 tallied in December 2015.

“In 2015, there were hardly any stores that operated claw machines,” said Kim, and added that he presumes there are probably more than 500 stores that run the machines if they include unregistered businesses. 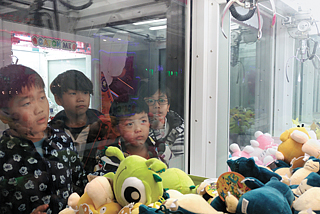 A group of children playing a claw machine at an arcade center in Seongdong District, eastern Seoul. [KIM SEONG-HYEON]

Filled with colorful and cute stuffed dolls that conjure up nostalgia, each store is usually equipped with around five to 10 claw machines. Some large spaces such as a three-storied store in Hongdae which opened in November, have as many as 50. Although some may question whether that many is necessary, a weekday visit at around 2 p.m. revealed dozens of people glued to the arcade games. In one corner, people surrounded a struggling couple trying to pull out a Pikachu, the store’s most popular character. According to one of the onlookers surnamed Lim, who just finished the Scholastic Ability Test in November and is a frequent visitor to the store, the place becomes really crowded starting at 7 p.m.

The popularity has even led to one blogger creating and posting maps online which show the locations of claw machine arcades throughout the Seoul metropolitan area. The map points out the locations of stores ranging from Hongdae to Bucheon, Gyeonggi.

Some may regard this latest boom as a short-term trend that will soon go away. Regardless of how long it will last, the rapidly growing popularity of claw machines is in some ways comparable to purchasing lottery tickets in that buyers invest small amounts of money in the hopes of winning a huge reward, and exemplifies how people in the current economic climate are increasingly looking for opportunities to get lucky.

With high profile actors such as Lee Min-ho and Gong Yoo playing claw machines in recent episodes of popular dramas, “Legend of the Blue Sea” (SBS) and “Goblin” (tvN), the craze quickly caught on. However, the real reason for the rapid rise in interest seems to lie deeper than what people see on TV.

Twenty five-year-old Lee Jeong-uk is a graduate student that once spent as much as 50,000 won ($45) at a claw machine. Even though he understands that the claw is too weak to properly pull out a stuffed animal, he just can’t stop in the hopes of getting lucky. His hope continues even as he has only been able to successfully grab around 20 toys despite having played the game three to four times a week over the last few months.

The same applies to another graduate student named Ki Yeo-woon. The 24-year-old says that she compulsively inserts 1,000 won bills in the hopes of picking up a cute stuffed character that would usually cost more than 10,000 won.

“Since I only insert 1,000 won at a time, I don’t realize how much I’m spending while playing the game. It is only after I spend all of my money that I realize I have wasted a large sum.”

Although some may think that only young people would be fooled into playing the addictive game, quite a number of older people also fall victims to claw machines, including a man in his late 40s, who was recently at a claw machine arcade in Anyang, Gyeonggi, that he often drops by to play a game after work because “it helps me forget about the stress I feel at work.”

One of the reasons behind the sudden popularity can be explained by people’s wish to benefit from low cost, high reward entertainment amid harsh economic realities, according to culture critic Ha Jae-geun, the author of “TV Shock.”

“The stumbling economy makes people crave something big for a cheap price. These expectations make them feel excited when playing claw machines that they can bet on.”

Another reason behind the boom is the growing preference for cute characters, which can also be connected to the harsh economic climate.

“These days, people are very into cute characters, as displayed by the lines of people waiting in front of McDonald’s for hours just to get character figures. People fall for cute things especially when the economy is weak. The harsher reality is, the more people feel comforted when they see something cute, which is why reality shows featuring babies have become popular these days. Also, the game is a form of nostalgia that reminds people of the characters they played with during childhood.”

Opening a claw machine arcade has grown to become a popular business venture thanks to its high cost-effectiveness, as operations requires minimal maintenance and startup costs.

Amid the popularity of the game, consultants that exclusively help entrepreneurs open claw machine arcades have appeared. According a consultant contacted last week, opening a claw machine arcade requires only a few things: claw machines, money exchange machines, prizes and a store sign. (Also needed: a deposit and monthly rent.) Claw machines cost about 2.3 million won a piece, while prizes needed to fill each machine cost some 500,000 won per month. Designing the interior of the space and employees to serve customers are not necessary.

Despite the low initial and maintenance costs, the machines rake in quite an earning, according to the owner of an arcade franchise headquartered in Icheon, Gyeonggi, which features over 60 locations nationwide.

“Although the amount of profit earned at each store varies depending on the location, each machine rakes in around 100,000 won per day, which means you earn around 1 million won per day - considering there are 10 machines in each store.”

He continued, “Since each machine only takes up 1 pyeong (3.3 square meters), you don’t need a large space, which saves on rent. Also, easy maintenance and not many additional costs other than the startup fees are other benefits in running a claw machine arcade.”

Popularity usually comes with cost, and claw machine arcades are no exception. While there are claw machine businesses that operate according to the law, there are some others that break rules.

By law, the contents inside a machine should cost below 5,000 won to prevent users from falling into addiction. However, licensed character dolls usually cost above 5,000 won, which means that if a business abides by the law, the dolls inside the machines are most likely unlicensed. If the dolls are licensed, they certainly cost more than the limited amount.

Despite the apparent illegality, it isn’t easy to track down offenders, according to Kim Gyeong-seok from GRAC. “Operators could simply insist that they got the licensed products below the market price because they bought them en masse.”

Licensing issues are another notable problem. Some of the most popular characters found in claw machines are the popular Kakao Friends characters, such as Ryan and Muzi. However, most of them are unlicensed dolls, according to Kakao Friends’ public relations firm Medicom.

“We presume that the number of Kakao Friends products that are being illegally distributed to claw machines hover between 1.5 to two million,” said a statement from the firm, which added that Kakao “fears such infringement would hurt the entire character industry as a whole.”

Kakao also expressed concerns over the degradation of the brand’s image, which would apply to other character brands that fill claw machines nationwide.

“If Kakao-looking products with low quality are distributed, it will disturb the management of the brand,” the statement went on to say. “We are currently working with organizations such as the Korean Intellectual Property Office and Ministry of Culture, Sports and Tourism to stop the infringement from further spreading.”

Another problem is the weakness of the crane that is used to pull out the toys. Of the 144 claw machine arcades that GRAC randomly chose to inspect, 101 of them were discovered to be violating the law, and 12 of them were found to be altered to weaken the strength of the machine’s claw, making it almost impossible for players to pull out their prize.

These violations could also determine how long the game’s popularity will last, according to culture critic Ha.

“Whether this trend will continue could depend on the difficulty of pulling out a stuffed character because the reason its popularity diminished in the past was because people got fed up with not being able to win their prize.”

Professor Ha Young-won, who teaches consumer behavior at Sogang University, also expressed a similar point of view regarding the future of the claw machine trend.

“People sometimes wish to experience thrills that come from uncertainty, as can be displayed by the public’s enthusiasm for watching sports games or scary movies. However, the difference between that and claw machines is that the latter is relatively simple, meaning that it will be a short-term fad [that people will lose interest in.]”