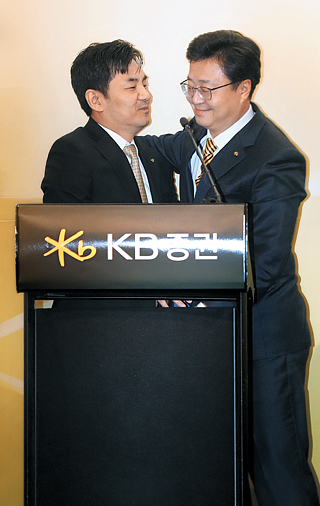 The merger of KB Investment & Securities and Hyundai Securities isn’t a simple marriage of two brokerage firms but an attempt to build a global financial investment firm.

This was the goal described by co-CEOs of KB Securities Jeon Byeong-jo and Yoon Kyung-eun during their first press conference Tuesday since KB Financial Group completed the 1.25 trillion won ($1.04 billion) acquisition of Hyundai Securities last June.

“We plan on creating a business that connects banking and securities as a mega-financial investment company,” said Yoon, the former Hyundai Securities CEO. “KB Securities will become a new investment bank.”

The newly merged KB Securities is currently the third-largest brokerage house in the local market with capital of 4 trillion won and customers’ assets amounting to 100 trillion won. The number of customers subscribing to its services amounts to roughly 3.8 million.

Yoo is in charge of business management, wealth management and sales and trading while his partner is leading investment banking and wholesale services.

According to KB Securities, the new brokerage has 25 so-called comprehensive branches that provide wealth management across the country. These are branches in which a customer can have access to various financial products as both bank and brokerage firm employees are stationed in the branches.

Although the sales and trading businesses will face challenges due to unfavorable market situation, KB Securities will try to expand its businesses in foreign exchange and foreign-currency denominated bonds.

“A diversified portfolio will strengthen our competitiveness,” Yoon said.

KB Securities has opened up five corporate and institutional banking centers. But the clients being targeted aren’t only big corporations.

“We have expanded our coverage from conglomerates to small and midsize companies,” said co-CEO Jeon. “By aggressively searching out new clients, we will try to find a model that would help both KB Securities and the company.”

Jeon added that while KB Securities will continue in traditional investment banking services including investing in infrastructure, it will diversify its project financing portfolios as a means of enhancing its risk management.

The two CEOs also pointed to overseas expansion as one of their long-term goals.

“We plan to enter other Asian markets such as Indonesia, Thailand and Vietnam,” Yoon said. “We plan to become a global financial investment firm that leads the Asian market.”

The CEOs said they believe when maximizing synergy with KB Financial Group affiliates, the net profit of the brokerage firm will likely reach 400 billion won by the year 2020 and achieve a return-on-equity ratio of over 10 percent, which will be one of the best in Asia.