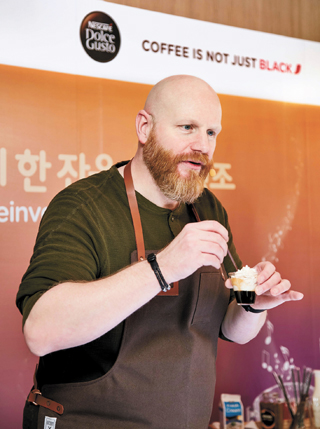 Korea has huge potential for capsule coffee - the question is how we will pull in more people to actually try the machine, says Maria Teresa Mendes, business executive officer for Nescafe Dolce Gusto and Cafe Nescafe of Nestle Korea.

Mendes, who rose to the post last year, pointed out the vast amount of coffee consumption in Korea, as well as consumers’ high standards on product quality. These factors, she believes, makes Korea an attractive market for coffee sold in small plastic pods capped with foil or filter paper.

She gave her insights on the Korean market during a press conference Tuesday at Nescafe’s Itaewon branch, organized to celebrate the launch of Dolce Gusto’s 2017 campaign, Creative Coffee. The program was devised to feature homemade coffee beyond black espresso or Americano.

Nestle barista Ola Persson demonstrated recipes using capsules such as coffee with orange zest and pepper or lemon juice. “The advantage of capsules is that the powder is sealed inside until it meets the water instead of losing its aroma by exposure to air,” he said.

A judge for the National Barista Championship, Persson has been Nestle’s “Coffee Creator” for 15 years and invented various blends for Dolce Gusto. “This year’s goal is to make more people experience the product, through both promotion events and expanding sales channels,” said Mendes. While Dolce Gusto is in department stores and discount chains, the company plans to expand its network, possibly to convenience stores.

Nestle controls 75 percent of the Korean capsule market. However, it’s facing heated competition this year with domestic coffee chains like Paul Bassett and Hollys Coffee releasing their own capsule products.

“I’m rather positive about the ongoing competition in that it will fuel the market to grow bigger than it is now,” Mendes said.