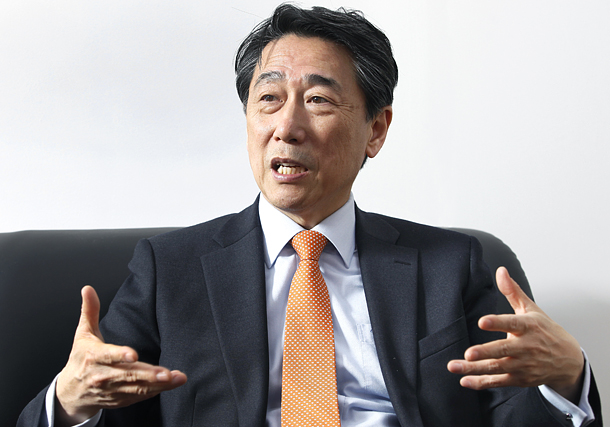 Oh Joon, former ambassador to the United Nations, speaks during an interview with the Korea JoongAng Daily in his office on Monday. Oh, who began his diplomatic career in 1978, will retire this Friday and begin teaching at Kyung Hee University in March. [PARK SANG-MOON]

With former UN Secretary General Ban Ki-moon set to return home on Thursday, it is considered a sure thing among political players in Korea that he will announce his presidential bid in the coming days.

It would be “very difficult” for Ban to decide what political party he would assign himself given domestic political circumstances, Oh Joon, Seoul’s former ambassador to the United Nations, who has known the former foreign affairs minister for over 35 years, said in an interview with the Korea JoongAng Daily on Monday at his office in Gwanghwamun, central Seoul.

Dismissing the Western media’s largely unfavorable coverage of Ban’s 10-year tenure at the UN, Ban’s close associate said such complaints stem from those disgruntled with Ban’s “inclusive leadership,” in which he tends to embrace the views of all those involved.

On North Korea, the diplomat of 38 years said the current sanctions will put the regime on a “collision course” with its people as demands for change will arise from those whose lives are affected by crushing sanctions. “I believe big changes, whether voluntary or involuntary, could come along in the near future,” said the 62-year-old diplomat, who will retire from his 38-year public-service post this Friday and begin teaching at Kyung Hee University this March.

Asked whether he would help Ban’s campaign, Oh, who earned public admiration for his emotional speech before the UN Security Council in December 2014 by addressing North Korea’s human rights conditions, said he would help out his former boss if asked to do so.

The following are excerpts from the interview with Oh.

Q. What do you think Ban will do when he returns?

A. For the first week or two, he will attend many events such as visiting the national cemetery or the families of former presidents to report on his achievements at the United Nations. Following that, he will embark on a political journey if he declares his bid for president. Considering what he has indicated so far, it is likely that he will enter the race.

If Ban already made a decision to run, I think he made that decision relatively recently, probably over the past two to three months. I think the recent turmoil that has engulfed the nation over the past three months has encouraged him to enter politics. His entry into politics will be his way of answering the people’s call.

The Western media’s coverage of Ban’s 10-year performance as UN chief has been generally unfavorable, to the point that he was called the dullest and among the worst UN chiefs ever. What is your view on such harsh assessments?

No UN chief is ever free from such criticism. Some are fair and some unreasonable and irrational. Many blame him for lacking charisma. I think such criticism comes from Ban’s inclusive leadership. Ban’s leadership can be described as hard-working and considerate of others. But these characteristics can be seen as indecisive and uncharismatic to those who see Ban as too willing to listen to everyone involved in the matter. It’s two sides of the same coin.

I think Ban’s inclusive leadership meets the demand of our time in Korean society because we are at a time when the country must find the best way to improve itself by finding common ground both domestically and internationally. Some may differ from me on believing whether we need a decisive leader to lead people without tending to their complaints. But personally, I think everything in this world is relative. I am not fond of people who believe in absolute truth and therefore are dogmatic.


Once Ban enters the race, what political affiliation do you think he will choose?

While it is totally up to him to decide, it will be a very difficult choice to make. When one enters politics, he or she must forge alliances with existing political forces. Deciding what political party to forge such alliances with is, for Ban, who champions unity and stability, not an easy thing to do in the Korean political establishment.

For instance, Republicans and Democrats in Washington have distinctively different policy objectives, making it easy for an aspiring politician to choose his or her party based on personal philosophy. But in Korea, even the most conservative candidates all say they champion people-friendly policies. Deciding Ban’s political alliance has to take into account the political background and context beyond just the matter of policy differences.

If Ban is elected, which policy area do you expect him to excel in?

He devoted his entire life to diplomacy and national security and thus he will have a strong advantage in these areas. If his inclusive leadership works as president, he will contribute to cementing national unity and even dealing with North Korea. But if the current confrontational political culture continues, with no one willing to sit down or comprise, his strong suit will not be used. But he will be a great asset to the country if such an environment for inclusive leadership is realized.

In 2016 alone, North Korea conducted two nuclear underground tests, which was unprecedented. Those two tests earned it two sets of crushing UN resolutions aimed to cut off cash flow in and out of the regime. What direction of the communist country do you expect North Korean leader Kim Jong-un to take?

The issue involving North Korea has become so complicated now, and the Kim Jong-un regime bears the brunt of responsibility. Every other nation in the world, including former communist countries, is competing for economic reform to raise the living standards of its people. By continuing its nuclear ambition, the North is making a huge bet and it will inevitably lead to growing discontent among its people, which in turn will force the regime to crack down on its people even harder.

Unlike his grandfather, Kim Il Sung, who founded North Korea and therefore was recognized as a legitimate leader by the North Koreans, Kim Jong-un holds no legitimacy in his power, as he was just born into that position. To make up for that, he wants to be the one who brings nuclear weapons capability to the country. By now, North Korea’s dire human rights record, its economic underdevelopment and nuclear program have become intertwined, making the prospect of resolving the nuclear impasse much more complicated than it would have been 10 years ago.

Even if it now wants to lift its underdeveloped economy, it can’t achieve this goal under the existing sanctions regime. Rising public discontent, spawned by the harsh sanctions, will put the regime on a collision course with the North Koreans. I believe big changes, whether voluntary or involuntary, could come along in the near future.