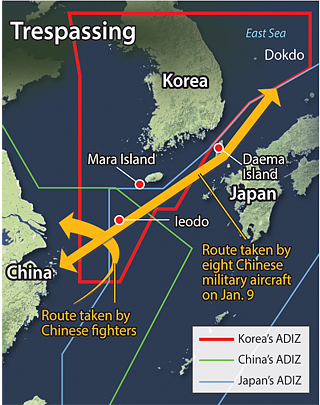 The Chinese warplanes’ entry into Korea’s ADIZ is being interpreted as another sign of Beijing’s ire over Seoul’s plan to deploy a U.S.-led Terminal High Altitude Area Defense (Thaad) system this year, which it says goes against its national strategic interest.

On Tuesday, the Joint Chiefs of Staff (JCS) confirmed that the Chinese military aircraft on Monday entered Korea’s ADIZ near Ieodo, underwater reefs that belong in waters that both Seoul and Beijing claim off the southern coast of Jeju Island.

The Chinese planes flew into Korea’s ADIZ off its southern coast between 10 a.m. and 3 p.m., according to a JCS official.

Its planes, including a new strategic bomber and an early warning aircraft, crossed into Korea’s ADIZ numerous times during their flight. At one point they flew within Korea’s ADIZ for an hour.

In response, Korea scrambled around 10 fighter jets Monday, including its Air Force’s F-15Ks and KF-16s. They flew to the area.

On the same day, eight Chinese military aircraft, including six of its Xian H-6 jet bombers, crossed the Korea Strait heading toward the East Sea, passing Daema Island, or Tsushima Island and entering Japan’s ADIZ. The aircraft, including an early warning plane and an intelligence-gathering plane, made a U-turn and returned to the East China Sea. Japan’s Air Force also scrambled its fighters in protest.

The Chinese aircraft did not violate Japan’s airspace, according to the Japanese Defense Ministry.

The Korean Ministry of National Defense said that it is in the process of analyzing China’s purpose in flying warplanes into Korea’s ADIZ.

China unilaterally proclaimed an ADIZ in the East China Sea on Nov. 23, 2013, which was protested by Seoul, Tokyo and Washington.

China’s newly proclaimed ADIZ overlaps Korea’s and Japan’s at points where the countries have disputes over claims, such as Ieodo.

Korea responded by expanding its own ADIZ to include Ieodo, which it effectively controls, in December 2013.

While military planes are generally expected to notify a country when entering its ADIZ, these areas are not considered the country’s sovereign air space under international law.

Chinese military aircraft entered Korea’s ADIZ in February and August on similar routes as used Monday, flying in Korea and Japan’s air defense identification zones, according to the official.

“In the past, it was rare for Chinese bombers to enter Korea’s ADIZ,” a defense official said. “The fact that numerous bombers entered is rare, as well.”

When asked by Seoul why its military aircraft entered Korea’s ADIZ, Beijing was said to have replied that the flights were exercises.

The official continued, “We are in the process of analyzing their exact intentions.”

“Seeing the scale of the entry and the time, it does not seem like a simple military drill or reconnaissance activities,” said Jang Kwang-il, a professor at Dongyang University in North Gyeongsang and a former deputy minister for policy at the Ministry of National Defense.

“It is a warning message from China to Korea and Japan amid discord over the deployment of the Thaad battery and the East China Sea sovereignty dispute.”

The decision by Korea and the United States to install the Thaad system on the peninsula last July was protested by China, which believes its powerful X-band radar could be used by Washington to spy on it. It is now levying unofficial sanctions on Korea, affecting the tourism, entertainment and cosmetics industries.

Jang described the nuclear-capable H-6 bombers as China’s version of America’s B-52 Stratofortress strategic bombers. “Whenever there is a provocation by North Korea, the United States sends its B-52 bombers to the Korean Peninsula,” he continued. “Likewise, China sending a large number of its H-6s is a sign of armed protest.”

“It appears that Japan is also taking this incident seriously,” a Korean government source added.