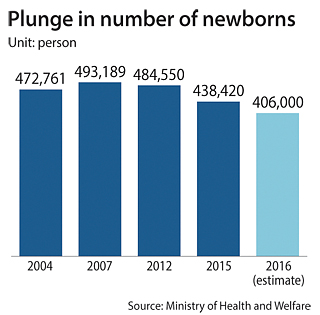 Sung, who is 30 and engaged, decided to delay her marriage another year.

“I have a fiance and we know we are for each other, and people tell us to get married now,” she said, “but we don’t have enough saved to buy a house. We’re now looking for one in the suburbs where housing is cheaper.”

Sung’s situation is not an uncommon one in Korea.

“Marriage used to mean good things, like becoming a parent, getting more experiences and higher salaries and having one’s own home,” said Yoo Jae-eun, a student at Incheon National University at a forum on combating low birthrate, organized by the Prime Minister’s Office in December.

“But now, marriage is a burden to the young,” Yoo said. “On top of that, fewer people are finding jobs. More than 12.5 percent of the young are unemployed. This is why we call ourselves the Sampo Generation.”

“With some 1.5 million to 2 million won salary a month we have to pay for our phone bills, food, rent, transportation and maintenance fees,” Yoo said. “How can anyone prepare for marriage with what’s left over?”

The number of marriages dropped to an all-time low last year. With only 227,900 married from January to October, the overall rate dropped 6.4 percent from 2015.

The low rate of marriage is alarming given that the country has already hit the lowest point ever in terms of births. According to the Ministry of Health and Welfare, some 406,000 babies were born last year, the number dropping 7.4 percent from 2015 and the lowest it has ever been in the country. With this, the number of births a woman is expected to have in her lifetime dropped from 1.24 to 1.17.

Six ministries, including the Health Ministry, Ministry of Education and the Ministry of Environment, submitted on Monday to Hwang Kyo-ahn, prime minister and acting president, a plan to create a population policy response team within the existing presidential commission on low birthrate and aging society. The team will comprise 22 experts selected from heads of government bureaus and from the private sector.

Critics question how much the new team will be able to do things differently.

The presidential commission on low birthrate and aging society did not hold meetings beyond December 2015.

Additionally, most of the 151 trillion won government budget in the past decade to boost the birthrate and address the problem of Korea’s aging society was spent on programs irrelevant to either issue, according to the Saenuri Party Rep. Na Kyung-won’s investigation last year.

The Health Ministry, however, claimed new measures to combat the dropping birthrate will be implemented this year. According to the ministry, a new insurance for fertility treatment will be provided to 215,000 infertile couples from October.

“With the new insurance policy, more couples will be able to receive the treatments at lower costs,” said Woo Hyang-je, head of the Division of Childbirth Policy of the ministry.

But some experts are calling for more comprehensive measures than simply focusing on infertility. For example, some female employees still face stigma at work for trying to earn maternity leave.

“I told my company that I am pregnant, and they told me to quit my job,” said a client of the working women support center of the Seoul Metropolitan Government. “I asked the company if I could receive unemployment benefits, and they changed things around so that I could not qualify for it.”

“More comprehensive policies to assist to-be-parents are in order,” said Lee Jae-in, former head of the Korea Childcare Promotion Institute. “These include policies to support newlyweds with more affordable housing and tax credits, as well as expansion of support for single mothers and fathers.”