Koudelka’s work captures the pathos of life as a ‘Gypsy’

Koudelka’s work captures the pathos of life as a ‘Gypsy’ 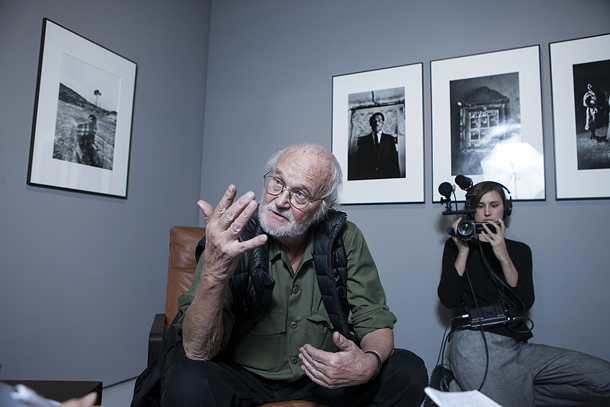 For his first solo exhibition in the nation, Czech-based photographer Josef Koudelka, 79, brought over 111 photographs from his “Gypsies” series. [KWON HYUK-JAE]

In 1968, the world’s photography society was shocked to see a series of photos introduced by an anonymous photographer who dubbed himself “P.P. (Prague Photographer).” Then 30-year-old photographer Josef Koudelka captured the moments of the Soviet invasion of Prague and was anonymously awarded the Overseas Press Club’s Robert Capa Gold Medal the following year.

The Czech-based man entered photography in the 1950s, becoming a full-time photographer in 1967. Other than the Soviet invasion photos, Koudelka is also known for his photos of Romani people (often called gypsies, though many Romani consider this term offensive), through which he strives to express the pain and anguish of nomadic life.

What’s interesting is that a lot of his photographs were made when he himself was a nomad. Koudelka left his country in 1970 as he was exiled for the Soviet invasion photos, and began the sorrowful life of a wanderer.

“I slowly became a part of the gypsy life, sometimes photographing them and sometimes being photographed with them,” said Koudelka during his visit to Korea for his first solo exhibition here. “Through gypsy life, I learned that one doesn’t need to own a lot of things to live, and that the present is much more important than the future. Gypsies are a bit like epicurean philosophers.”

Josef Koudelka’s famed photos. The photos were taken in Moravia, 1966; Prague, 1968; and Slovakia, 1967 from top to bottom. [JOSEF KOUDELKA/MAGNUM PHOTOS]

Koudelka’s simple attire speaks volumes about his years of life as a nomad. Bringing over 111 photographs from his “Gypsies” series, he said, “Every morning, I wake up thinking, ‘What should I take pictures of today?’ This simple thought makes my day happier.”

Ever since he was exiled in 1970, Koudelka spent nearly 20 years wandering until he went back to Prague in 1990 to hold an exhibition. The photographer naturalized as a French citizen in 1987.

“The reason why I chose gypsies as my subjects was because they form very strong images. Just by looking at them, one can feel the music and pathos that spew out of their bodies. They’re like actors on stage without direction.”

For the exhibition, Koudelka divided his photos into groups of three to five. He also gave some tips on how to get the most out of the exhibition.

“My photographs have stories. When taking a look around my exhibition, the order of photos doesn’t matter. But I advise them to focus on each group and imagine the story behind them. It will enable them to capture the messages I intend to convey about life.”

Celebrating his 80th birthday, Koudelka is to hold an exhibition at the Centre Pompidou in Paris next year under the theme “Exiles.” He mentioned that in the face of unrelenting fear for terrorism and destruction, he hopes to listen to people’s cry for freedom and peace through his projects.