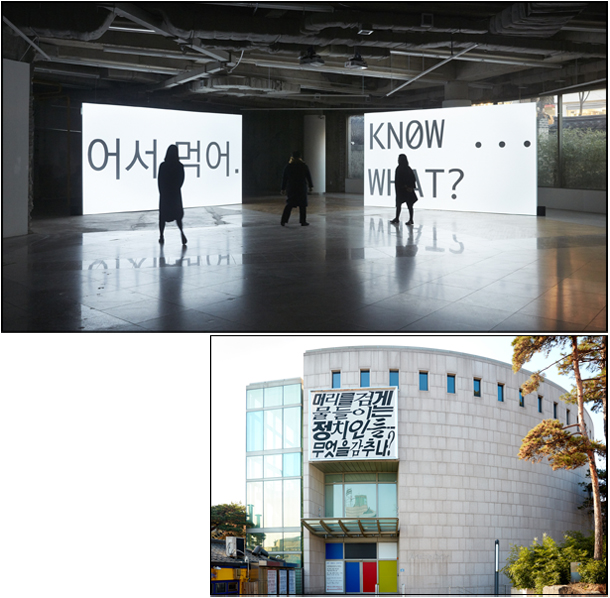 Top: the two-channel video work “All Unhappy Families Are Alike” by the artist duo Young-hae Chang Heavy Industries is installed on the first floor of the Art Sonje Centre in central Seoul. Above: The outdoor installation by the artist group on the museum’s wall reads “Politicians who dye their hair - what are they hiding.” [ART SONJE CENTER]

Those who have ever wondered how almost every Korean politician on TV has raven-black hair regardless of their ages may giggle at the banner now hanging on the facade of the Art Sonje Center in central Seoul. It reads “Politicians Who Dye Their Hair - What Are They Hiding?”

On the back wall of the museum, specializing in contemporary art, hangs another banner which reads “Samsung Means to Die.”

Some might think the banners would be a better fit at the ongoing protests against the recent presidential scandal, in which many politicians and some major conglomerates are suspected of being involved. But, in fact, they are art pieces conceived in early 2016 - before the scandal emerged - by a team of artists with the unique name, Young-Hae Chang Heavy Industries. The artist duo of Korea-born Chang Young-hae and Chinese-American Marc Voge started their solo show at the Art Sonje Center last week.

The text on the banners are the titles of two of the three video pieces installed inside the Art Sonje Center. On each of the museum’s three floors are one of the two-channel video works that consist mainly of text and music.

The video installation “Samsung Means to Die” on the second floor tells the story of Koreans seen as or hoping to be recognized as successful middle-class people by using Samsung products, working at the conglomerate, living in a Samsung apartment and dying at the company’s hospital. Unlike the impression of the title, it is more a delicate satire about how Capitalist Korea is haunted by the large company’s brand than a direct attack on the conglomerate.

The video work installed on the first floor has the title “All Unhappy Families Are Alike,” an inverse of the famous opening lines of the novel “Anna Karenina” which reads: “Happy families are all alike; every unhappy family is unhappy in its own way.”

On the two screens rapidly flicker text in Korean and English which is in sync with fast and strong drum beats that later unfolds into a vivid scene of a family dinner, where typical conversations are ongoing but tensions elevate as suppressed conflicts between family members become visible and finally explode.

The third floor features the video work “Politicians Who Dye Their Hair - What Are They Hiding?” The video’s witty comments about politicians could please many viewers tired of lawmaker’s behavior.

Kim Sun-jung, director of Art Sonje Center and curator of the exhibition, explained that the three video pieces respectively cover the topics of ‘family,’ ‘economy,’ and ‘politics.’ “They present a view of Korean society in a way easy to understand, such as a ‘video tutorial,’” she said. “That’s why the title of the exhibition is ‘Life in Three Easy Video Tutorials.’”

Kim quoted the artist team as saying “We feel weird, as we conceived the works in March, 2016, but now it seems as if we had anticipated the ongoing controversy over politics and large conglomerates. Sometimes, life imitates art.”

According to Art Sonje, the duo has made their signature animated texts set to their own music in 26 languages and shown many of them at some of the world’s major art museums including the Tate in London, Pompidou Centre in Paris and the Whitney Museum of American Art in New York.