1 million Koreans are jobless for first time ever

1 million Koreans are jobless for first time ever 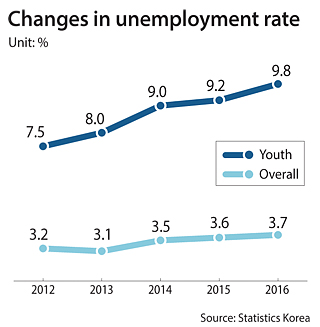 The number of out-of-work Koreans surpassed 1 million for the first time in history, largely due to a struggling manufacturing sector.

The unemployed rose by 36,000 at the end of 2016 compared to the previous year, hitting 1.01 million, Statistics Korea said Wednesday. Technically, this is the first time the figure surpassed 1 million since 2000, when the government started compiling data in its current form.

Practically, it’s the first time ever that so many Koreans didn’t have jobs, a reflection of a weakened economy and the growth in population.

“The manufacturing sector performed poorly last year due to weak exports and the corporate restructuring taking place,” said Kim Ie-han, a director at the Ministry of Strategy and Finance.

The unemployment rate for Koreans aged between 15 and 29 hit 9.8 percent last year, another all-time high for a full year. In 2015, the figure hit an all-time high of 9.2 percent.

The overall unemployment rate rose 0.1 percentage point to reach 3.6 percent, which is the highest since 2010.

Even though the manufacturing sector was weak last year, services and construction improved. The Finance Ministry said the increase in the number of people working in services was a result of a low base effect from the previous year. An outbreak of Middle East respiratory syndrome hit the services sector hard in 2015.

One positive sign in the labor market last year was that there were more female workers compared to the past.

The share of economically active female Koreans rose from 51.8 percent in 2015 to 52.1 percent last year, while the figure for men rose 0.1 percentage point from 73.8 percent to 73.9 percent in the same period.

“There were more jobs that offer flexible working hours and the government’s decision to expand support for women who left the job market and were having a hard time getting back to work also appeared to help,” said Kim.

Meanwhile, the economically inactive population rose 0.4 percent year on year to reach 16.1 million in 2016. Fewer people said they were not interested in finding jobs due to education and childcare, and there were more people saying they are too old to participate in the labor market, the agency said.