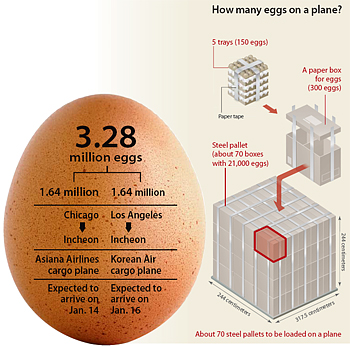 About 3.28 million fresh eggs from the United States will arrive in Korea by early next week, double the number originally expected. The government expects to alleviate the ongoing egg shortage that has occurred due to the recent outbreak of avian flu.

Fresh eggs from the United States will begin arriving through Incheon International Airport as the government has recently removed tariffs on egg products.

This will be the first time that the government will import fresh eggs from abroad to sell on the market. Korean Air and Asiana Airlines will transport the eggs from the United States.

The first flight carrying the U.S eggs appears to be Asiana’s Boeing 747 cargo plane. “The cargo plane that will only carry eggs will depart Chicago on Friday and it will arrive to Incheon airport on Saturday afternoon,” said Kim Sang-yong, a public relations director at Asiana Airlines.

The two airliners will bring about 1.64 million eggs, weighing 100 tons each. However, eggs are difficult to be transported on an airplane as they are break easily, which means that they need to follow strict regulations on cargo flights set by the International Air Transport Association.

First, airliners need to pack eggs in paper boxes that have been certified by the IATA. There will be 10 trays with 30 eggs each packed in a box. The trays will be taped.

Then boxes will then be stacked on steel pallets. About 70 boxes, or nearly 20,000 eggs, will be placed on a pallet. These pallets will be wrapped once again before they are loaded on the plane. However, airliners still haven’t finalized plans on how to package eggs yet.

“Eggs can endure various impacts on flights if they are packed as the IATA regulation suggest,” a representative at CJ Korea Express said. The owners of eggs take care in packaging and delivering them to the airplanes and many delivery companies get involved in the process. Airliners inspect the packaging.

“We haven’t decided yet on how to carry eggs on flights yet but we will finalize the plan after we are done discussing with [U.S. farmers],” said a representative at Asiana Airlines.

Temperature management is important when it comes to delivering eggs since they need to be fresh. The recommended temperature is between 1 degree (33.8 degrees Fahrenheit) and 5 degree Celsius.

“There are many Korean traders in the United States who ask about the egg shipping process,” said Shim Jae-woo, a director at Korean Air’s U.S. branch. In fact, Korean Air has established a team that will only focus on shipping eggs. The government decided to exempt tariffs of egg-related products that were previously 8 to 30 percent to deal with the egg shortage. Some 98,600 tons of eggs will be exempt, the government said. It would take about 986 Boeing 747 planes to ship that amount.

The eggs shipped from the United States are likely to be on the market before the Lunar New Year. “We will have the eggs to be out in the market by the holiday,” said Lee Joon-won, vice minister at the Ministry of Agriculture.

The government expects the price per egg shipped from the United States to be about 310 won. This is not that different from 312 won per egg produced in Korea.