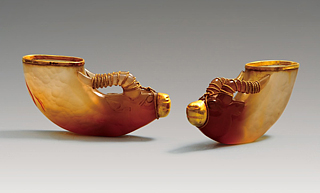 To Jan. 25:
The exhibition presents 131 pieces of ancient Chinese art. Ranging from earthenware made in the Neolithic Period to white jade sculptures by 20th-century masters, the exhibits are a history of Chinese crafts.

Pieces on exhibit include a golden bell studded with gems from the Western Chin Dynasty (265~316), a pair of ox-head agate cups decorated with gold from the Liao Dynasty (916~1125), pictured, and a seal made of tianhuang stone, dubbed the “Stone More Precious than Gold,” which was carved by a 20th-century master craftsman.

To Feb. 10: Kimsooja, 59, one of the most famous Korean contemporary artists, presents her latest work in the museum’s annual solo show, sponsored by the auto giant.

Of the nine pieces on display, eight - including the participatory installation work “Archive of Mind” and the sound art piece “Unfolding Sphere” - have never been shown before. 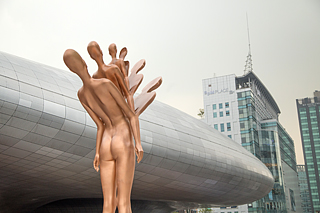 To Feb. 26: Artist Kim Young-won, 69, famous for his sculptures of human figures with symbolic detail, exhibits 17 works of art in and around the DDP.

The exhibits include “Shadow of Shadow - Flower Blossom,” an 8 meter (26 foot) bronze sculpture, pictured, which depicts a human body branching out into several egos.

Among the exhibits are also a group of 40 red-painted fibre-reinforced plastic sculptures of human figures titled “Shadow of Shadow 2.”

Admission is free. Go to Dongdaemun History and Culture Park Station, line Nos. 2, 4 and 5, exits 1 and 2.

To Feb. 26: The solo exhibition of Olafur Eliasson features his 22 works of diverse media, including large-scale installations and photographic works, in which poetry and science coexist.

The highlight is the installation “Rainbow Assembly” in the museum’s Black Box. It has water falling from sprinklers installed in a circle on the ceiling. With light, the mist creates a shining white aura set against the darkness. If viewers stand inside the circle, they will see rainbows shimmering and undulating around the water curtain.

Including the installations “Reversed Waterfall” and “Your Museum Primer” on view in this exhibition, Eliasson’s art in general encompasses a certain perception of nature that brings the natural world indoors.

Admission is 8,000 won for adults. The museum is closed on Mondays. Go to Hangangjin Station, line No. 6, exit 1 and walk for five minutes.

For an indefinite period: “Really?” is the permanent exhibition of the Arario Museum, which opened on Sept. 1, 2014, in the iconic ivy-covered brick building “Space,” designed by the legendary Korean architect, Kim Swoo-geun (1931-86). Space’s intricately linked display areas and spiral staircases remain in their original state, while the artwork is cleverly installed in unexpected locations.

About 100 pieces by more than 40 artists, including Korean-American video art pioneer Nam June Paik and British artists Marc Quinn and Tracey Emin, are on display.

Go to Anguk subway station, line No. 3, exit 3 and walk for three minutes.