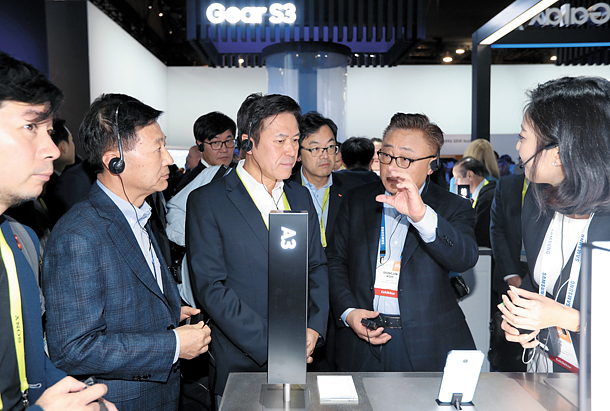 SK Telecom has vowed to spend a whopping 11 trillion won ($9.2 billion) in the next three years to build an ecosystem centered on artificial intelligence, the Internet of Things and next-generation 5G networks as it seeks to become a global IT leader.

The top telecommunications firm said Wednesday it would join forces with global tech behemoths such as Samsung Electronics and Nvidia as well as local start-ups to foster a futuristic ecosystem, to which it will allocate 5 trillion won. The fields of investment will encompass autopilots, connected cars, smart homes, big data, storage devices, global content, media service and energy management, the company said.

The other 6 trillion won will be dedicated to 5G connectivity, a network that will take over from the dominant fourth-generation long-term evolution in three years at the earliest.

“Should the 5 trillion won investment be executed for the new ecosystem as planned, it will lead to new growth-related industries,” said an SK Telecom spokesman, adding an optimistic projection that the effects include 9 trillion won in production and the creation of some 60,000 new jobs.

Such an astronomical amount of investment to advance its own technology is unprecedented for any local conglomerate. Samsung only recently emerged as a new global entrant in the race to grab leadership in artificial intelligence as it snapped up Viv Labs, a start-up founded by Siri creators, in October. Terms of the deal are unknown, but Facebook and Google reportedly expressed interest in acquiring the firm with offers of $100 million to $200 million.

The announcement from SK Telecom comes less than three weeks after the telecom operator named Park Jung-ho, former CEO of SK Holding C&C, as its new CEO, in a year-end reshuffle. A specialist in international finance and mergers and acquisitions, Park has been entrusted to propel “global growth” of the third-largest conglomerate’s flagship company.

“Korea, which spearheaded the wired and wireless Internet era, has lost momentum in the telecom industry in tandem with the wide-scale adoption of smartphones,” Park told reporters at the Consumer Electronics Show in Las Vegas last week. “We are deliberating on how to reclaim the leadership as the world shifts again toward the Internet of Things.”

As part of efforts to reach a breakthrough, SK Telecom signed a deal with Nvidia, a Santa Clara, California-based chipmaker that specializes in graphic cards at CES, under which the latter will be using SK’s mobile navigation T Map for the Korean map that will be included in the autopilot technology Nvidia is developing. SK Telecom, in return, will use Nvidia technologies to upgrade T Map’s content.

SK Telecom is also poised to open a “Telco Infra Project” in Seoul in partnership with Facebook, Nokia and Intel to incubate start-ups in telecom and help them advance abroad.

Analysts predict SK Telecom’s massive investment in rising technologies will spearhead growth. “SK Telecom is expected to undergo a huge change in future growth strategies and governance structure in the wake of the replacement of its CEO,” said Choi Nam-gon, an analyst with Yuanta Securities. He foresaw the possibility of SK Telecom proceeding with an acquisition.