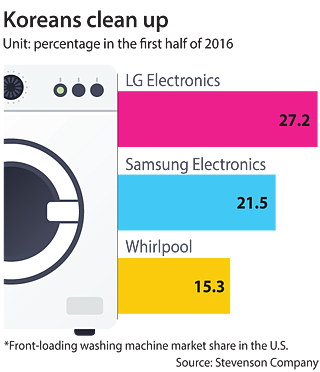 The U.S. International Trade Commission ruled Tuesday that the two Korean home appliance companies imported and sold residential washing machines made in China at a price lower than their fair value, a practice known as “dumping,” according to a report by the Wall Street Journal.

The decision came two years after the U.S home appliance company complained that the two Korean conglomerates were selling products for less than their manufacturing costs. It is in line with a decision by the U.S. Department of Commerce last December that said it would slap antidumping taxes on made-in-China machines of 52.51 percent on Samsung and 32.12 percent on LG.

“This is a gratifying win for American manufacturing, particularly our more than 3,000 employees at our factory in Clyde, Ohio, who make clothes washers for American consumers,” said Whirlpool Corp. CEO Jeff Fettig. “The government made the right decision today, affirming that Samsung and LG’s long-term pattern of serial dumping injures American appliance manufacturers and threatens U.S. jobs.”

Samsung called the decision “not reflective of current market conditions.”

“Samsung Electronics has complied with related regulations in the U.S. market and always prioritized consumer value through fair competition and innovation,” said a Samsung spokesperson.

LG Electronics said that it was disappointed with the recent rulings.

The company added the U.S. Department of Commerce’s margin calculation was incorrect and said no injury was done to the U.S home appliance industry by the company.

“As the leader of the U.S. market [in front-loading washing machines], LG Electronics will overcome the barrier established by the tariff with our premium lineup,” said the company in its official statement.

The companies expect the ruling to have a minimal impact on their sales. Although they didn’t provide specifics, both Samsung and LG said they have shifted supply of washing machines bound for the United States from China to other countries, namely Thailand and Vietnam.

Federal trade regulators will issue a final ruling on the case on Jan. 23.