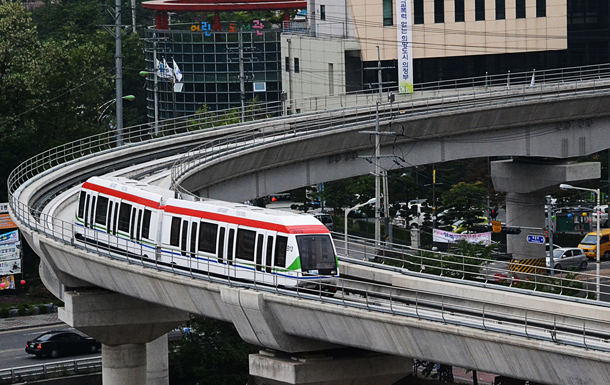 The Uijeongbu Light Rail Transit Company filed bankruptcy to the Seoul Central District Court on Wednesday after just four and a half years, as the light rail failed to draw enough commuters and was insolvent for years.

The board members of the light rail company unanimously agreed on Wednesday to file for bankruptcy after its debt rose beyond 240 billion won ($200 million) at the end of last year.

The light rail trains, smaller in size and shorter than subway trains, run on the Uijeongbu Line, or U Line, in Uijeongbu, Gyeonggi. The railway stretches 11.1 kilometers (6.9 miles) from Balgok Station to Tapseok Station. The light rail opened on July 1, 2012, and was expected to draw nearly 80,000 commuters a day in its first year, according to figures obtained by the company from a consulting agency.

Five financial institutes, including KB Kookmin Bank, lent some 352 billion won as operating funds to the Uijeongbu Light Rail Transit Company. The group sent an official letter to the company on Jan. 2, requesting that it shut down the business.

If the Seoul Central District Court declares the company bankrupt, the operation of the light rail will be handed over to the Uijeongbu city government, which can decide to run the railway itself or select a new company to do so.

“Under no circumstance will the city government shut down the operation of the light rail,” said Uijeongbu Mayor Ahn Byung-yong during a press conference on Jan. 5. “The light rail will run for the sake of the city residents who are using it.”

The company was to operate it for 30 years before handing it over to the city government.

It was the first light rail in the capital region, and was initially praised as an environmentally friendly form of public transportation that is likely to draw many commuters as it connects with subway Line No. 1, which travels into central Seoul.