‘I want to be able to call Korea home’

‘I want to be able to call Korea home’ 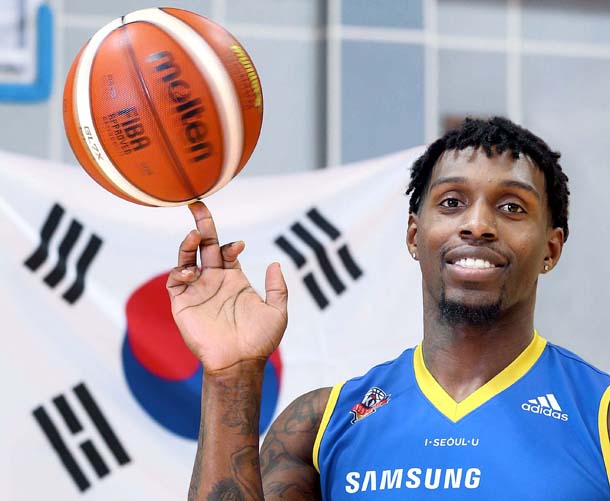 Ricardo Ratliffe, center for the Seoul Samsung Thunders, expresses a desire for Korean naturalization. Ratliffe intends to retire after playing in South Korea, but wants to be of service to the South Korean national basketball team in the Asian Games and the Olympics. [KIM SANG-SEON]

“It’s not because of money that I want naturalization [to Korean citizenship],” said Ricardo Ratliffe, the 28-year-old American center for the Seoul Samsung Thunders who, at the start of the year following the end of an away game with Jeonju KCC Egis, remarked, “I want a Korean passport.”

Ratliffe hopes to one day emblazon the Korean flag on his jacket as a member of the Korean national basketball team, which should come as good news for the Korean Basketball League.

Graduating from the University of Missouri in 2011, Ratliffe came to Korea and played for five seasons. Starting from 2012, he was a boon to Ulsan Mobis Phoebus for three continuous seasons.

He brought a 94-90 victory in the game against the Seoul SK Knights on Tuesday, scoring 32 points and taking 16 rebounds. The Samsung Thunders have won 13 consecutive home games. In the current season, Ratliffe has scored 23 points on average, taken 12 rebounds per game and propelled the team to 1st place with 21 wins and 7 losses.

In an interview with Ratliffe at a gym in Yongin, Gyeonggi, Ratliffe was reserved, unlike many other foreign athletes who are often brimming with excitement.

“Having started my pro life in Korea, it’s my second home,” said Ratliffe. “In the last five years, I’ve only stayed two months in America every year.”

Part of the reason for his desire to become Korean is his daughter Rhea. “My daughter, who was born in Suwon in 2015, thinks of herself as a Korean,” said Ratliffe. “When she sees an American, she feels shy, but she embraces Koreans. Rhea attends a Korean kindergarten and learned Korean.”

While the interview with Ratliffe was conducted in English, he did say a few phrases in Korean: “My name is Ratliffe,” “hyungnim” (elder brother), “It’s okay” and “I’m hungry.”

One thing that cannot be ignored is Ratliffe’s experience in international tournaments. While playing for Mobis Phoebus in 2014, he led the team to victory at the International Federation of Basketball (FIBA) William Jones Cup in Taiwan.

Through Ratliffe’s efforts at that time, the team succeeded against the Japanese national team and Korean fans on social media left messages such as “Thanks for winning the Korea-Japan match.”

“At that time, I felt, ‘I guess I’m a Korean representative, huh, I want to play for Korea,’” he said.

Yoo Jae-hak, 54, coach of Mobis Phoebus, recollected, “At that time, even though there wasn’t a championship bonus, Ratliffe diligently played.”

According to KBL regulations, Ratliffe earns 273 million won ($231,800) in the 7-month season. If he naturalizes, he would receive 800 million to 1 billion won annually. But he says this is not the reason he wants to become Korean.

“If I wanted money, I could have accepted an offer of naturalization to Taiwan three years ago,” he said. “Even after that, though there were calls for naturalization from other countries, I declined them because I love Korea.”

Since the 1996 Atlanta Summer Olympics, the Korean national basketball team has been unable to qualify for the Olympics. Last September, Korea was smashed by Iran in the FIBA Asia Challenge by over 30 points. The efforts of Kim Jong-kyu, 207 centimeters (6 foot 9 inches) and Lee Seung-hyun, 197 centimeters were in vain against Iran’s towering center, Hamed Haddadi, at 218 centimeters.

There is a trend for most Asian countries to buttress their team through naturalization. “Though Ratliffe (199 centimeters) isn’t especially tall, he’s proficient at fighting” said Lee Sang-min, coach of the Samsung Thunders. “He was a track-and-field athlete, so he’s fast. In the event of naturalization, he will be a big help for seven to eight years.”

Ratliffe fulfills the “achievement in his or her field,” “awards at home and abroad” and “annual salary higher than per capita income” requirements.

“If Ratliffe naturalizes, his team will in truth have three foreign players,” said Kim Tae-hwan, an MBC Sports+ analyst. “If that happens, the discrepancy between team strength will become wider. There is concern of a naturalization domino effect. I know Charles Rhodes [33, center and power forward for Ulsan Mobis Phoebus] and Aaron Haynes [36, small forward for Goyang Orion Orions] have thoughts of naturalizing, too.”

“I want to say, I’d like to thank Koreans who support my naturalization,” said Ratliffe. “Please convey to the Koreans who are against [my naturalization] that I’m not doing it because of money or to make a three-person foreign player super team. I just love Korea. It’s just that I want to contribute to Korea’s achievements in the Asian Games and the Olympics.”