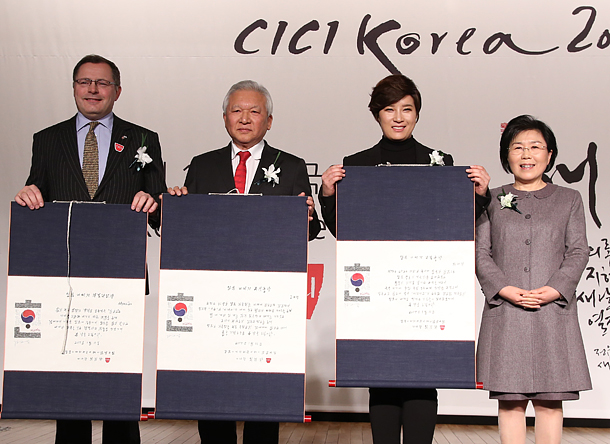 Recent political events involving President Park Geun-hye have tainted Korea’s national image with the country’s culture ministry in the center of criticism. Nevertheless, the Corea Image Communication Institution (CICI) continued to make efforts to promote Korea and its culture across the globe, starting this year with its annual Korea Image Award ceremony. CICI honors three people including one foreigner each year to recognize their achievements in promoting Korea in a positive light.

The 12th Korea Image Awards was held Wednesday evening at the InterContinental Seoul COEX in southern Seoul, and attended by some 700 international and local opinion leaders including former Prime Minister Han Seung-soo and dozens of ambassadors to Korea.

The 2017 Korea Image Stepping Stone Award, which goes to an individual person, company or object that contributed in boosting the Korean image, went to recently retired professional golfer Pak Se-ri.

Known as the godmother of Korean golf, CICI said that Pak’s outstanding achievements after making a sensational LPGA debut in 1998, when Korea was suffering from a financial crisis, “was seen as a source of hope and courage to Koreans.”

Referring to the famous shoeless swing that helped her win the US Women’s Open in 1998, Choi Jung-hwa, president of CICI stressed that thanks to Pak leading the Korean women’s golf, Korea was able to continue produce great female Korean golfers who make it to the front pages of newspapers worldwide.

“I wouldn’t be able to receive this award if it weren’t for the great junior golfers who have been making great achievements,” said Pak while receiving the award. “It was the Korean spirit in me - the spirit of refusing to give up, the tenacity, perseverance and the passion - that helped me produce such great achievements.”

Meanwhile, the Korea Image Stepping Stone Bridge Award, which is given to a foreign individual, a company or an object, went to AlphaGo, the first computer algorithm that beat a professional in the game of Go. Created by British artificial intelligence research company, DeepMind, which now belongs to Google, Choi said that AlphaGo and Korea’s top ranking Go-player Lee Se-dol’s historic tournament was watched by 200 million viewers, producing 35,000 news articles and bringing the world’s attention to Korea and the game of Go.

Since AlphaGo could not make it on stage personally to accept the award, British Ambassador to Korea Charles Hay accepted the award in its place.

“It may be the first time that a man can do the work of a machine as I’m here on [AlphaGo’s] behalf,” said Hay while accepting the award.

The final Korea Image Firestone Award, which is given to an individual or an object that ignited the spread of good images of Korea to the rest of the world, went to Cho Tae-kwon, chairman of Kwangjuyo, which makes traditional style plates and containers, as well as traditional Korean liquor while also running two restaurants Gaon and Bicena which received three stars and one star, respectively, from the 2016 Michelin Guide Seoul.

Cho was recognized for “turning Korea’s culinary culture into a synthetic art and culture.”

“Thanks to Cho’s efforts as a ‘hansik [Korean food] missionary,’ he has taken the lead in the globalization of Korean food culture and has continued to show the possibilities of Korean cuisine to the world,” Choi said. Cho thanked CICI for the award, saying that he was able to “jump into the businesses that was succeeded to him by his parents and grow it after witnessing that a country’s domestic economy begins with a great food culture.”