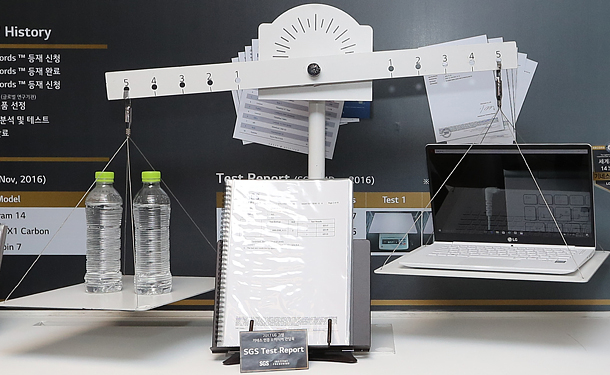 LG Electronics displays its new All Day Gram laptop at the company’s headquarters in Yeouido, western Seoul on Thursday. It was balanced against two bottles of water to demonstrate its lightness. [LG ELECTRONICS]

LG Electronics’ 14-inch “All Day Gram” ultra-slim laptop, unveiled on Jan. 2 with two cousins of different sizes, is so light that it celebrated setting a Guinness World Record on Thursday. Samsung Electronics on the same day showcased its Odyssey laptop, which has been specifically designed for computer game fans.

The new Gram from LG weighs 860 grams (1.9 pounds), and is the most lightweight among 70 laptops of the same size in 25 countries, according to Guinness research. LG earned the first record on June 29 last year for its previous model, the 15-inch Gram laptop that weighs 980 grams.

The new All Day Gram laptops come with three screen sizes - 13.3, 14 and 15.6 inches. But their batteries tout twice as much capacity compared to existing ones, thanks to new technology developed by its battery affiliate LG Chem.

The company says the 13.3-inch model lasts for a day on a single charge and is able to play videos for up to 17 hours without a break, while one with a 14-inch screen has a battery life of 23 hours on a single charge.

“All Day Gram laptops are set to ease the burden of users who had to carry around an adapter that is as heavy as 300 grams all the time,” said an LG spokesman. “You can travel on a plan from Seoul to New York with the laptop on, without having to charge it midway.”

LG is betting on ultra-slim laptops, a category usually defined as those that are 21 to 23 millimeters (0.8 to 0.9 inches) thin, as consumers increasingly prefer lightweight and portable gadgets. Sales have risen by an annual average of more than 25 percent since 2014 and six out of 10 laptops sold in Korea in the first nine months of last year were ultra-slim laptops. That compares to less than 30 percent market share in 2013.

Samsung, meanwhile, launched its first gaming laptop that marks a new sub-brand of its gaming PC, called the Odyssey. Coming with two Intel processors - the fifth-generation Core i5 and higher-end Core i7 - the laptop features a 15.6-inch display and Nvidia’s newest graphic card GTX 1050 and up to 32 gigabytes of DDR4 RAM for its memory. But it weighs 2.53 kilograms, more than two times more than LG’s ultra-slim model with the same screen size.

The laptop is also armed with HexaFlow Vent, an advanced cooling and ventilation system. Created for maximum performance and endless play, the HexaFlow Vent, which is located on the bottom panel of the device, can be opened to upgrade the storage and memory.

Depending on the capacity of its processors, the Odyssey’s price runs from 1.8 million won to 2 million won.