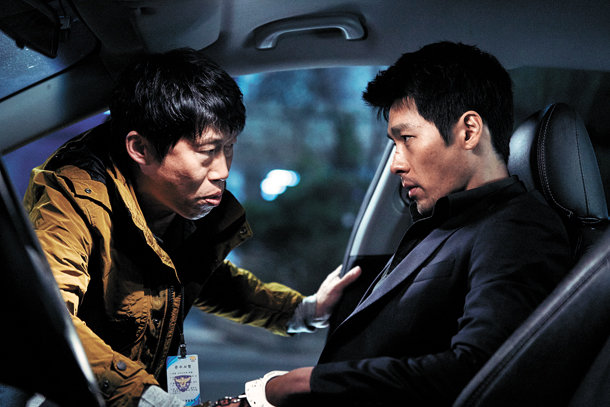 Similar to last year’s “Master” and “Asura: The City of Madness,” “Confidential Assignment” continues the streak of action-packed, crime-filled stories bound to fill theaters with fans looking for non-stop thrills.

Directed by Kim Seong-hun of “My Little Hero” (2013), the action film kicks off with a North Korean detective Rim Cheol-ryeong (Hyun Bin), who barges into a building to capture a criminal organization that prints counterfeit currency using a copperplate, only to leave his fellow co-workers, including his wife, shot to death. Learning that the leader of the organization (Kim Joo-hyuk) fled to South Korea, the North sends Rim to Seoul to find the copperplate and the leader through a joint investigation with a police team from the South.

“I wanted to make an entertaining movie that could make people laugh,” said the filmmaker during a press event held in Seongdong District, eastern Seoul, earlier this week.

The director added that the movie has a classic theme: friendship. “I hope the audience perceives this movie as a film that depicts how two very different men coming from different environments with different goals communicate and befriend each other instead of simply regarding it as a film that uses the North as a subject matter.”

The CJ-distributed movie shines light on the friendship that gradually blossoms between the overly-serious Cheol-ryeong and his clumsy South Korean partner Gang Jin-tae (Yu Hae-jin), who in fact has been ordered to spy on Cheol-ryeong and catch the crime organization’s leader before him. Because of their initial trust issues, their relationship starts off shaky in the beginning but they ultimately get closer after going through all sorts of danger.

The dynamic action scenes, which incudes thrilling car-chases, are what drove Hyun Bin to get on board with the movie. “I was mesmerized by the genre and the character,” he said and added that “Confidential Assignment” marks his first action film.

Yu’s famous humorous and warm-hearted character, which he has shown multiple times through his previous works, including “Luck-Key” (2016), adds humor to the upcoming movie, which could have been too serious without it. Jin-tae’s awkward actions and talkativeness are the necessary counterweight to Cheol-ryeong’s taciturn and overly-serious attitude. Also, humor derived from cultural misunderstandings between Jin-tae and Cheol-ryeong is another source of entertainment sure to trigger the audience’s laughter.

“Confidential Assignment” is not reluctant in criticizing the government. When a North Korean official hands Cheol-ryeong a smartphone that he should use in Seoul, the official describes it as a “device that the South [Korean government] uses to control its people.” Another notable scene is when Jin-tae points out CCTV installed across the streets of Seoul to tell Cheol-ryeong that “the South and the North are the same in that they both closely monitor their people.”

Although “Confidential Assignment” is another routine action film that moviegoers have seen so many times in the past, it still is an entertaining film that will warm hearts. In fact, depending on people’s response, a sequel may be made, according to the director.

The film will hit theaters on Wednesday, and is rated 15 and over.