‘Moana’ bravely voyages out into the world

‘Moana’ bravely voyages out into the world 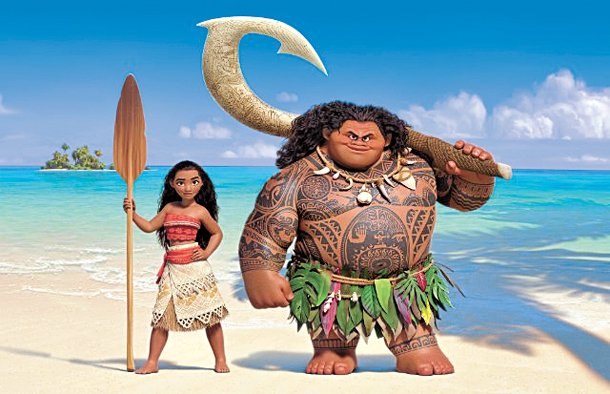 Disney’s “Moana” is an enjoyable animated film that detours from the conventional story lines of previous Disney princesses. [THE WALT DISNEY COMPANY KOREA]

Moana is anything but a typical Disney princess. Born the daughter of a tribe’s chief, Disney’s first Pacific princess is strong, brave and lovable. But at the same time, she is flawed and foolhardy, making her more down-to-earth than princesses seen on screen before.

Like many Disney characters, Moana (voiced by actress Auli’i Cravalho) wishes to venture beyond her backyard. She yearns to see the world beyond the reef that encircles the island, which her isolationist father repeatedly disallows her to do as she needs to focus on becoming the next chief of her people. However, a catastrophe on her island convinces Moana to defy her father, and she ventures to sea to persuade a tattooed, muscle-bound demigod named Maui (voiced by Dwayne Johnson) to restore the heart of Te Fiti, a goddess that maintains balance over the island’s life. Without Te Fiti, the world has started to lose vitality, taking away the community’s food supply. The heart of the goddess, which humans urged Maui to steal, is the obvious metaphor that describes how humans treat the ecosystem and nature.

Although Moana is similar to other Disney princesses in that she comes from a social upper class and is beautiful, she sets herself apart from most of them with her heroic qualities. Moana is bold enough to confront the giant Maui that is at least twice her size and is independent enough to willingly learn how to sail instead of solely relying on Maui to sail the boat under the violent sea storms and waves. In short, she is an inspiring heroine who aspires to save the world.

Moana refuses to be called a princess, and she doesn’t have a love interest in the story, as her relationship with Maui is closer to a sibling. Instead it revolves around the internal struggles of Moana and Maui, and their joint adventure.

“Moana,” directed by Ron Clements and John Musker from a screenplay by Jared Bush, is definitely an exciting Disney film designed to provide the audience with an enjoyable experience. The handful of catchy musical showstoppers such as Maui’s “You’re Welcome” and the giant crab Tamatoa’s (Jemaine Clement) “Shiny” will have the audience singing the melodies as they walk out of the theater. And the dimwitted chicken named HeiHei, one of Disney’s famously cute sidekicks, will trigger smiles from moviegoers.

Disney’s new heroine, who is unafraid to speak her mind and is unapologetic in finding justice, might be the kind of young woman that today’s society needs and wants.

“Moana” dropped on Thursday, and is rated for all.