Ban says he knows how to save a nation

Ban says he knows how to save a nation 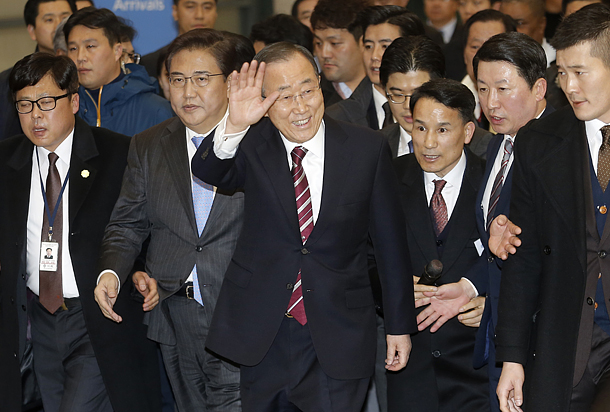 Former UN Secretary General Ban Ki-moon reacts to the welcoming crowd at Incheon International Airport on Thursday as he returned to South Korea after his 10-year service in New York. [YONHAP]

Former UN Secretary General Ban Ki-moon returned to Korea on Thursday after 10 years of service in New York, putting himself at the center of a political drama that is unfolding ahead of a presidential election likely to be held much sooner than originally scheduled.

Ban arrived at 5:35 p.m. at Incheon International Airport, where a huge number of his supporters greeted him with banners that read “Ban for national unity” in an apparent reference to his likely presidential ambition.

Standing before the crowd, he thanked his supporters and began his speech by reflecting on lessons he said he had learned at the United Nations.

“As head of the UN, I strived to protect the rights of the underprivileged and promote equal rights for women and raise global awareness on global warming,” he said. “I have learned a lot over the past 10 years.”

In what sounded like his declaration to run for president, he said he had learned what it took to turn a country into a thriving or a failed nation.

“I am with you with unwavering commitment to sacrificing myself for the good of the nation and the people,” he continued.

On the state of the nation during the unprecedented abuse of power scandal that led to President Park Geun-hye’s impeachment, he said he came back to the country with a “heavy heart,” noting, “The country is ridden with corruption and irregularities.”

Ban’s supporters at the airport expressed their hope that Ban would succeed President Park.

“He experienced global leadership as UN chief and is therefore capable of solving the country’s problems using his diplomatic skills,” said Jang Ji-ho, 30, who welcomed Ban at the airport. “He is also capable of going beyond partisan interests to solve many problems facing the country.”

But the site was not without detractors. One man held up a picket sign that read, “Did you serve as UN chief for 10 years just to jump into domestic politics? Shame on you Ban!”

Ban, who entered the diplomatic world in 1970 and led a 46-year career until completing his second term at the United Nations on New Year’s Eve, may try to cast himself as someone free from political scandals or corruption, though recent reports allege he took a bribe worth $230,000 from a local businessman.

The fact that his younger brother and nephew were charged with bribery by U.S. prosecutors on Tuesday is certain to hamstring Ban on his potential journey to the Blue House.

While Ban has yet to announce his presidential bid, it is considered a sure thing that he will soon do so on the back of strong approval ratings that put him neck and neck with frontrunner Moon Jae-in of the major opposition Minjoo Party of Korea.

But it is still possible the lifelong diplomat may not announce a bid in the face of far-reaching scrutiny into his personal life.

While Ban is generally praised by Koreans for having helmed the multinational body, an act many consider to have enhanced the nation’s image, his performance there was criticized by Western media. He was called the dullest and among the worst UN chiefs ever, one who was addicted to protocol.

Should Ban officially announce his run for president, his time at the UN could become a campaign issue for the opposition, which is eager to find any trace of weakness to tarnish his 46-year legacy in the diplomatic world.

“If Ban decides to join the race to compete with us, we have no choice but to confront him,” said Minjoo floor leader Woo Sang-ho on Thursday.

Minjoo lawmakers have already indicated they will not go easy on Ban with its spokesman, Koh Yong-jin, likening Ban to President Park and her associates for his denial of any knowledge of the bribery charge levied against his brother and nephew.

“Ban just keeps saying he knows nothing of it,” said Koh. “Such a denial is what we have been hearing all along over the past two months from those who obstructed the Constitution.”

Minjoo also said if Ban wants to commit himself to the country by jumping in the race, he must undergo a rigorous vetting process beforehand.