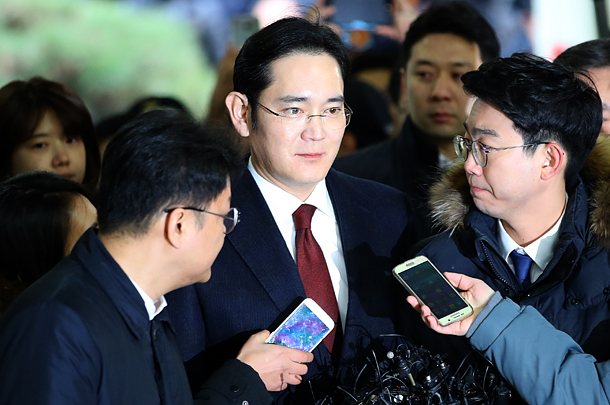 Lee Jae-yong, center, vice chairman of Samsung Electronics, arrives to be questioned as a suspect in the influence-peddling scandal that led to the president's impeachment at the office of the independent counsel in Seoul on Thursday. [YONHAP]

Lee Jae-yong, the third-generation leader of Samsung Group, was grilled Thursday by an independent counsel over allegations that he used company money to bribe President Park Geun-hye through a controversial friend.

Lee, vice chairman of Samsung Electronics, appeared at the office of independent counsel Park Young-soo at 9:25 a.m. escorted by five aides. Standing in front of photographers, Lee did not answer reporters’ questions. He said, “I apologize to the people for having failed to display my good side.”

Lee is the first tycoon to be questioned as a bribery suspect in the independent counsel’s probe into the abuse of power and influence-peddling scandal involving President Park, her friend Choi Soon-sil and conglomerates. Investigators suspect that Park put pressure on the state-run National Pension Service to support a controversial merger of two Samsung units in 2015 in return for the conglomerate’s generous support of Choi and her family and donations to two foundations controlled by Choi.

The merger in July 2015 played a key role in the third-generation transfer of control of Samsung by solidifying Lee’s grip on Samsung Electronics.

In a press briefing Thursday, assistant independent counsel Lee Kyu-chul said Lee could be charged with more than bribery. Because the money given to Choi and her family were corporate funds of Samsung Electronics and Cheil Worldwide, the investigation team is also questioning Lee on suspicion of embezzlement and breach of trust, he said.

The independent counsel planned to ask Lee if he was behind the decision to pay Choi and her family money. It wants to confirm if Lee gave direct orders to Samsung executives to make the arrangements after one-on-one meetings with President Park in July 2015 and last February.

The investigators also want to confirm if Lee was aware that the money was paid in return for the pension fund’s support of the merger.

Lee and Samsung denied that the donations and sponsorships were in return for the pension fund’s support of the merger, but the independent counsel sees them as acts of bribery. It also believes Lee committed perjury at a National Assembly hearing in December by denying knowledge of Choi and Samsung’s support for her projects.

The independent counsel asked the National Assembly on Wednesday to accuse him of perjury.

“Although he received the president’s demands for bribes and ordered Samsung Group executives to arrange Samsung affiliates’ provision of bribes to the recipients designated by the president, he perjured that he did not do so,” the team wrote in a request to the legislature.

It was the first time in nine years that Lee became a subject of a criminal investigation. In February 2008, Lee was questioned by another independent counsel as a suspect about alleged irregularities committed by Samsung affiliates as a part of a father-to-son wealth transfer.

The process was accomplished via an allegedly illegal purchase of convertible bonds held by Samsung affiliates, including Everland, which is the de facto holding company of the conglomerate. While Lee was not indicted, his father, Chairman Lee Kun-hee, was. He was convicted and stepped down from management. He was pardoned in 2009.

Meanwhile, JTBC, an affiliate of the Korean JoongAng Daily, reported Wednesday that Park gave Lee a plan for a winter sports education center, drafted by Choi’s niece Jang, during their meeting on Feb. 15, 2016. Park asked Lee to provide 900 million won to the project, it reported.

The report said the independent counsel recently obtained testimony from Jang that she had created the plan on the eve of the Park-Lee meeting. Choi telephoned her and ordered her to create a plan that could be funded by Samsung, Jang was quoted as saying.