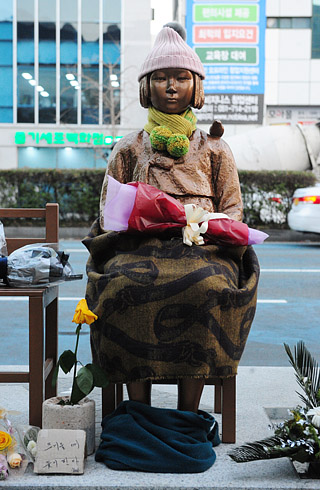 Washington has stepped in to play a mediating role amid diplomatic friction between Seoul and Tokyo over demands for the removal of statues representing victims of Japan’s military’s wartime sexual slavery from near its diplomatic missions.

According to Korea’s Ministry of Foreign Affairs Thursday, Kerry “commended” the Korean government “for sincerely implementing its agreement with Japan on the ‘comfort women’ issue and for coping with the difficult situation between the two countries in a restrained manner.”

Japan has temporarily recalled its two top diplomats to protest the latest erection of a statue in Busan of a young girl representing the women who were forced into sexual slavery by the Imperial Japanese Army’ before and during World War II.

Japanese Ambassador to Korea Yasumasa Nagamine and Yasuhiro Morimoto, the consul general in Busan, returned to Japan Monday and met with Japanese Prime Minister Shinzo Abe over the installation of the comfort women statue near the back gate of its consulate in Dong District in Busan at the end of last year.

Kerry is said to have reaffirmed that the U.S. government will continue to do what it can to help improve Korea-Japan relations and promote trilateral cooperation with Washington.

Yun said it is “important to respect the purpose and spirit of the agreement,” adding that the Korean government “plans to do its utmost to develop its relations with Japan in a future-oriented way.”

This last conversation between Yun and Kerry, who will be succeed by Rex Tillerson in the Donald J. Trump administration, also focused on the importance of enforcing tough sanctions and putting pressure on North Korea in light of its provocations.

This comes amid criticism of the Korean government’s passive attitude toward the Busan statue, which has led to diplomatic tension with Tokyo and inflammatory language by Japanese politicians toward Seoul, as well as increased domestic criticism over the so-called comfort women agreement.

In a cabinet meeting Monday, Prime Minister Hwang Kyo-ahn urged restraint on both sides and emphasized that the point of the agreement “is to recover the dignity and honor of the victims and heal the wounds in their hearts.” Hwang is Korea’s acting president.

But critics say the Ministry of Foreign Affairs should have stepped up before the recent fraying of relations with Tokyo.

A Busan-based civic group installed the statue on Dec. 28 to coincide with the one-year anniversary of the Korea-Japan agreement, though it did not have a permit.

The Dong District Office and police initially removed the bronze statue, built with public donations, similar to the iconic Peace Monument that has sat across from the Japanese Embassy in central Seoul since 2011. After a massive public backlash, the district office restored the statue to its location at the back of the Japanese consulate two days later.

“While I remain chief of Busan’s Dong District Office, I will not remove the statue,” Park Sam-seok, head of the Dong District Office in Busan, told the JoongAng Ilbo on Wednesday. “Because this has become a Korea-Japan diplomatic issue, the central government, which has diplomatic authority, should take care of it. If it wants to remove the statue, the Foreign Ministry should do it.”

The Japanese government has demanded Seoul remove the statues in front of its embassy in Seoul and the Busan consulate. Its politicians have said Tokyo has kept its part of the agreement by paying 1 billion yen.

Japan cites the 1961 Vienna Convention on Diplomatic Relations, which dictates that host countries must protect the premises of diplomatic missions against any intrusion or damage and prevent any disturbance of its peace or impairment of its dignity.

“We look forward to the [central] government, along with the related local governments, civic organizations and related individuals gathering wisdom on this issue,” said Cho June-hyuck, a foreign ministry spokesman, in a briefing Thursday.

The Asahi Shimbun reported Thursday that the Japanese envoys to Korea are expected to return after Tuesday, later than initially expected. It cited a Japanese government official who said, “The ball is in Korea’s court. Japanese doesn’t have to move [first].” Prime Minister Shinzo Abe is on an overseas trip until Tuesday.