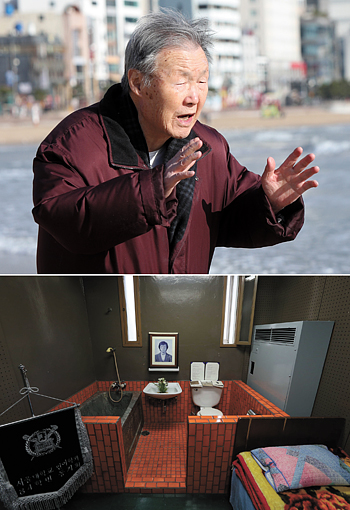 Top: Park Jeong-ki, father of Park Jong-chul, during a recent interview with the JoongAng Ilbo. Bottom: The interrogation room in which student activist Park Jong-chul died after police questioning on Jan. 14, 1987, is preserved in Yongsan District, central Seoul. [KIM SANG-SEON]

Park Jeong-ki was 59 when he lost his youngest son on Jan. 14, 1987. After three decades, he has barely overcome the tragedy. It’s become a habit for the father to reach out for a tissue every time Jong-chul, who died at 23, crosses his mind.

Now the gesture is almost instinctive, and he often absent-mindedly makes it even when his eyes are dry.

“It’s a disease,” says Park. “People normally cry when they get sad, but my tears never really come. Ever since that day, I’ve been shedding them inwardly.”

Saturday marks the 30th anniversary of the death of Park Jong-chul, a student activist of the pro-democracy demonstrations against the authoritarian rule of former President Chun Doo Hwan. Jong-chul, who served as leader of Seoul National University’s linguistics department at the time, was tortured to death by policemen during a round of questioning about the whereabouts of a radical campus leader.

Local authorities initially claimed the student died of shock. It was only after a doctor, prosecutor, JoongAng Ilbo reporter and priest, among others, came forward to reveal the truth that Jong-chul’s story was told, prompting the June Democracy Movement.

The mass protests in June 1987 saw over 200,000 people participating from all over the country, forcing the ruling government to undertake drastic democratic reforms, including a new president elected by a direct, popular vote.

The JoongAng Ilbo, which carried out the exclusive report on Jong-chul’s death 30 years ago, recently took the time to contact the people who were involved in the exposure to hear their thoughts on how the student activist impacted Korean society, and how the country ended up finding itself in the quagmire of a massive corruption scandal surrounding President Park Geun-hye and her confidante, Choi Soon-sil.

“I always think of him,” says Park Jeong-ki, Jong-chul’s father. “But I never let my thoughts out. He randomly pops up about once or twice a year during family gatherings, but never do we talk about him in the open. We try to change the topic.”

Park worked at the Busan city government until his son’s death, after which he took on the role of vice president, president and advisor of a civic group of families who lost their loved ones during the democratic uprisings.

“When I turn on the news and see students out on the streets,” says Park, “I think of him a lot. It’s really beautiful how peaceful [the protests] are.”

Park adds, “Deep down, I feel sorry for them because it’s as if [the rallies are an] extension of the June Democracy Movement that failed to end on a sound note.”

Oh Yeon-sang was a physician from the Chung-Ang University Hospital when he first laid eyes upon Jong-chul in a tiny interrogation room at the police’s infamous anticommunism bureau. The only thought that ran through his mind was to save him, a dying patient who was barely wearing any clothes in the blistering cold after police officers had questioned him and left the room.

Jong-chul was lying on the ground, motionless. Oh rushed to perform CPR, but after half an hour, it became evident he would never come round.

“I told the officers he seemed to have died,” recalls Oh, 60. “They rolled his body in a blanket and shoved it in an elevator.”

The following day, on Jan. 15, 1987, throngs of reporters rushed into Oh’s office with questions about Jong-chul’s death. Oh only said what he had witnessed: “There was a tub. I heard bubbles pop inside his lungs. The floor was wet.” The doctor refrained from saying anything more, but reporters sensed something had gone terribly wrong.

After that day, Oh was grilled for nearly 20 hours by police and prosecutors. For a week, he had to hide in a hotel on the outskirts of Seoul, fearful authorities might come after him.

“I never intended to speak out for democracy,” says Oh. “As a doctor, it was my duty to talk candidly about my patient’s conditions.”

Oh managed to work at Chung-Ang University Hospital until 2009 before opening his own private hospital in Dongjak District, southwestern Seoul.

The first person in the local media to shed light on Jong-chul’s death was Shin Sung-ho, 61, a professor of journalism and mass communication at Sungkyunkwan University in Seoul, who at that time was a JoongAng Ilbo reporter on the Social Affairs Desk.

“I knew I could be in danger,” says Shin, “but the more I dug in, the more faith I had in the story.” Shin recalls having to sleep in a motel near his office to evade authorities.

It was Lee Hong-kyu, 80, then a prosecutor, who leaked the news about Jong-chul to Shin. He was ordered by higher-ranked officials never to release the news, and yet he had.

“I couldn’t turn a blind eye,” confides Lee. “When I saw Shin, I instantly lost control and told him what had happened.”

Hwang Jeok-jun, 70, a former forensic officer who autopsied Jong-chul, was pressured by police to write on official documents that he had died of a “shock in the heart.” Hwang refused to comply and concluded he “suffocated due to neck pressure.”

“When I was a med student,” he says, “I was told never to compromise with injustice. Back then, it was nothing more or less than me following my professional code of ethics.”

Choi Hwan, 74, a former prosecutor who now works as a lawyer, remembers being told by police to immediately cremate Jong-chul so that they could hide the evidence that he was tortured by them. Choi refused, creating time for the truth to come out.

“I could instantly tell he was tortured,” recalls Choi. “And I knew by instinct that I had to do whatever it took to get to the bottom of it.”

When Rep. Lee Bu-young, former chairman of the Uri Party who was locked up in jail on charges of leading an antigovernment rally in May 1986, decided to write a handwritten letter disclosing the government’s scheme, it was two prison guards who helped him get the letter out of the cell two months after Jong-chul’s death.

The documents were passed to a third prison guard, then to the Korean Catholic Church. It was finally read aloud in May 1987 by the late Father Kim Seung-hun during a memorial service marking the seventh anniversary of the Gwangju uprising.

The June Democracy Movement of 1987, also known as the June Struggle, paved the way for Korea to revise the Constitution, permitting a direct election of the president and share of power with other government offices.

But neither did the movement nor the story of Jong-chul completely eradicate the deep-seated corruption in domestic politics, says Yoon Pyeong-jung, a humanities professor at Hanshin University.

“State violence has continued ever since,” says Yoon, “in the form of the National Intelligence Service wiretapping, or the Blue House taking advantage of the prosecution.”

The National Intelligence Service was busted in 2005 for illegally eavesdropping on the phone calls of 1,800 opposition lawmakers and journalists from 1998 to 2002. In 2011, it forced 70 psychological warfare agents to write malicious online comments against presidential contenders from the opposition bloc.

And still, corruption lingers to this day as the Ministry of Culture, Sports and Tourism faces allegations that it colluded with the Blue House in blacklisting 9,473 Korean artists for their liberal views.

“From the point when Park Jong-chul died until the June Democracy Movement, there weren’t any large-scale student protests on the streets,” says Seo Jung-seok, an emeritus professor of sociology at Sungkyunkwan University, “because students were intimidated by the ruthless violence exhibited by the Chun Doo Hwan administration.”

What young protesters needed at that time, continues Seo, was the bravery to fight back. Thirty years later, what society needs to tackle the Choi-gate scandal is a real interest in domestic affairs, others claim.

“Politics in the 1980s were tough, but at least people felt stability in their personal lives,” says Sohn Ho-cheol, a political science and diplomacy professor at Sogang University. “Today, we’ve managed to keep up the formality of democracy, but in terms of how stable we feel, I think we’re worse than back then.”

The sense of losing control over their lives, Sohn says, led to people caring less about how their political leaders were controlling state resources.

“People are flooding out to [Gwanghwamun] Square thinking that their indifference toward authority was the main cause of the formation of an abnormal government,” says Sohn, “and because they’ve grown so enraged about becoming victims.”