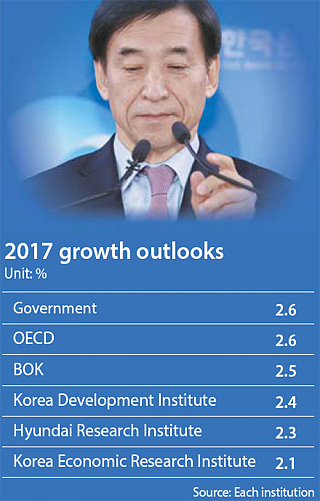 It was the week domestic economy factor that led the Bank of Korea to join other institutions, including the Ministry of Strategy and Finance to lower its economic outlook for this year and keep the benchmark borrowing rate at 1.25 percent for the seventh consecutive month.

On Friday, the Bank of Korea lowered its outlook for this year from 2.8 percent to 2.5 percent, just 0.01 percentage point less than the Finance Ministry’s 2.6 percent target.

“There have been lots of changes since October, which was when we set the outlook at 2.8 percent,” said BOK Governor Lee Ju-yeol on Friday at a press briefing. “In Korea, non-economic factors such as politics have become more uncertain since then and they are causing consumer sentiment to weaken.”

Lee said domestic consumption data provided by the government improved mildly at the end of last year largely because of temporary factors such as the state-run Korea Sales Festa held last fall. Lee said the biggest challenge is how to improve consumer sentiment.

“The economic outlook has been lowered considering various factors, including weak domestic consumer sentiment, which might lead to domestic consumption weakening furthermore,” said Lee. “We also think the weak labor market due to ongoing corporate restructuring is also taking a toll on consumer sentiment. Uncertainties coming from overseas such as possible interest rate hikes in the United States this year and a stronger U.S. dollar were also considered in setting the new outlook.”

The government also hinted that the nation’s so-called potential growth rate could be readjusted from the 3 percent to 3.2 percent announced in 2015 especially due to demographic changes.

Potential gross domestic product is defined by the OECD as the level of output that an economy can produce at a constant inflation rate. Decreases may suggest an economy is losing sustainability in the long run.

The Korean government estimates that the population actively participating in the economy will start shrinking this year.

“For several years economic growth has remained at the 2-percent level, and Statistics Korea recently announced its projection for Korea’s population,” the BOK governor said. “Considering such factors, we believe that there would be changes in the potential growth rate.”

The central bank froze its key interest rate for the seventh consecutive month on Friday amid rising household debt and the recent interest rate hike in the United States.

The last time the monetary policy committee made changes was last June, when it cut the rate from 1.5 percent to a record low of 1.25 percent as a pre-emptive measure against potential risks caused by restructuring in the shipping and shipbuilding industries.

When asked if the BOK will raise Korea’s own borrowing rate if the U.S. Fed does so again this year, Lee said monetary policy doesn’t necessarily work that way and that Korea still has room with its monetary policies and that they will not automatically follow the United States.

HSBC has said that it expects the Korean economy to grow at 2.4 percent this year, which was lower than its estimate of 2.7 percent for 2016. It expects Korea’s key interest rate to be cut by 25 base points to 1 percent in the second quarter of this year.

“The risk is that the political situation could further weigh on consumer sentiment and the low growth dynamics are likely to push the BOK into cutting the policy rate further,” said James Lee, an economist at HSBC in a report. “Against this backdrop in GDP growth, the BOK should have room to ease further.”

Meanwhile, the BOK has held monetary policy board meetings once a month but decided to only hold them eight times a year from now on.