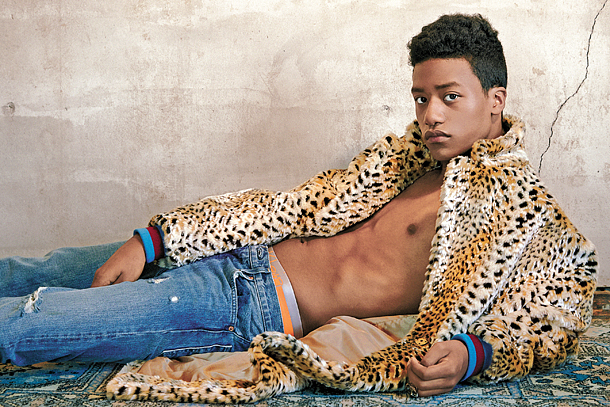 One could easily mistake him for a foreign model working in Korea, but his name is Han Hyun-min, born and raised in Korea.

Born to a Nigerian father and a Korean mother, the 15-year-old first made his appearance in a fashion show in March 2016. Even as a rookie model, Han made an impression with his exotic looks. During Seoul Fashion Week last October, the young model represented 10 domestic male fashion brands, including Heich es heich, Chang Kwang Hyo, D.Gnak and Munn.

Han, who is 190 centimeters (6 feet 2 inches) tall and weighs 65 kilograms (143 pounds), dreamed of becoming a model ever since he was young. One of his hobbies was window-shopping, admiring the clothes that hung in shop windows. From early on, Han wished to attend a modeling academy, but having four younger siblings made it difficult for his family to afford the two million won ($1,674) tuition for a three-month course. Instead, he practiced his walking posture by watching videos online.

Han’s debut in 2016 came unexpectedly, when the president of his current modeling agency, SF Models, saw pictures of Han on his Facebook account and contacted him. After testing him for a walk in the streets of Itaewon, central Seoul, the president immediately signed a contract with Han.

The audition for Seoul Fashion Week was less than a month away when Han signed on to begin his professional career as a model. Once a week, Han received lessons from experts, and the rest of the week, he stuck by the belief that practice makes perfect.

“Because I was like a clean slate back then,” Han said, “I absorbed everything like a sponge.”

He added, “Sometimes I change more than 20 times in a row. I guess they thought it was interesting to see me fit nicely into all sorts of clothes.” Different colors complement different skin tones, which means Han can model certain colors better than many of his colleagues in Korea.

Han was chosen as the opening model for for Heich Es Heich during Seoul Fashion Week last March.

Han calls his current situation a product of miraculous luck, since there had been no place for a black model in the Korean fashion industry beforehand. But thanks to the work of famous black models like Naomi Campbell, Joan Smalls and Tyson Beckford, Koreans are being exposed to more models of color. As the idea of diverse representation has become more important overseas and in Korea, the barriers for models of color in Korea are also slowly coming down.

“Except for the fact that people don’t talk to me backstage because they don’t think I speak Korean,” said Han, “being mixed-race isn’t that hard. I realize that I’m a very important precedent. More and more mixed-race models will be born, and I hope to be a good role model for them.”