Ozturk wants to bring his home countries together

Ozturk wants to bring his home countries together 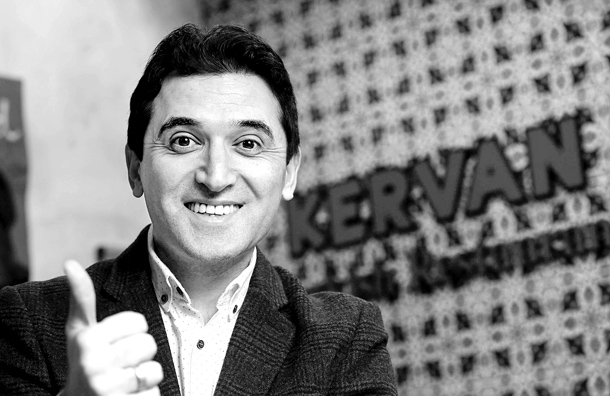 Sinan Ozturk, a Turkish man who became a naturalized Korean citizen in 2008, says, “In the future, I would like to do more to bring the two countries closer together.” [KIM SANG-SEON]

In the 2002 World Cup, he was chosen as the interpreter for the Turkish national football team for his fluent Korean. In 2005, he published a book about the Korean War. After naturalizing as a Korean citizen in 2008, Sinan Ozturk, 44, has now become the owner of the biggest Turkish restaurant franchise in Korea.

Ozturk currently owns nine restaurants, including five that belong to Kervan Group, where he is president. Kervan is a restaurant franchise encompassing a variety of Turkish restaurants, bakeries and kebab shops.

Ozturk’s ties to his second home go back 30 years. Born in Istanbul in 1973, the young Ozturk would listen to his father’s bedtime stories of the Korean War, slowly building his curiosity about the country.

“I heard vivid recollections of the war, such as the Kumyangjang-ni [Yongin, Gyeonggi] Battle, where a small number of elite Turkish soldiers fought off an army of Chinese communists,” he says.

“I shed tears when he told me that Turkish soldiers and Korean soldiers held each other in their arms and cried just before returning home after the truce was called.”

His father’s memories left such a strong impression on Ozturk that in 2005 he published a book on the heroic exploits of the Turkish soldiers who fought in the war, titled “Turkish Heroes in Korea.”

Ozturk decided to go ahead with his naturalization after he met his wife, Park Mi-jeong, while teaching Turkish at a Turkish Culture Center.

They were married in 2001. He is now a father to three teenage children, two sons and one daughter.

Ozturk was offered a position as the interpreter for the national Turkish football team in the 2002 World Cup by the Korea Football Association. This was a perfect role for Ozturk, as he was not only fluent in Korean, but had also been a member of the junior national football team. He was the eyes and ears for the Turkish team throughout its stay in Korea until the quarter-finals.

“I was so excited that I spent $2,000 of my own money to make a massive Turkish national flag [600 square meters, 67 kilograms] in Turkey and bring it to Korea,” he said. “The Korean Red Devils supporter team used it to cheer for Korea and Turkey at the quarter-finals.”

For some time, he continued his business in the football industry by working as an interpreter for Senol Gunes, who used to coach the Turkish national football team in the World Cup and started a new post in 2007 in the Korean pro football league as the coach for FC Seoul.

It wasn’t until 2009 that Ozturk began his business as a restaurant owner. He opened a small kebab place with two cooks he scouted in Turkey. It turned out to be a big success. Ozturk made enough money to expand his business and eventually began his very own franchise group with about 100 employees. The franchise plans to open two more restaurants in Itaewon by next year.

“I take pride in having devoted 20 years of my life in Korea to bridging the gap between Korea and Turkey by working in the football and food industries,” he says. “In the future, I would like to do more to bring the two countries closer together.”