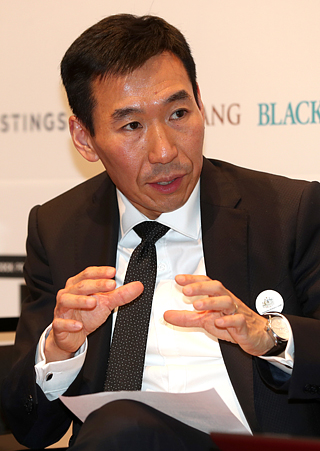 The first Korea-born Australian ambassador to Korea, James Choi, is interviewed by the Korea JoongAng Daily and the JoongAng Ilbo on Thursday. [KIM CHOON-SIK]

“It’s a very difficult time in Korea and certain Korean newspapers are calling it samyeon-choga [to be surrounded by enemies on all sides] and naewoo-waehwan [troubles at home and abroad],” he said. “I look at the difficult period Korea is facing, with the North Korean nuclear tests, Mr. Donald J. Trump’s inauguration and the isolationist trends in China.

“I want to remind Korea that there is a friend in the region and that Australia is a natural partner for Korea,” he said. “Australia is here as a friend and a partner in the Asia-Pacific region to meet these challenges.”

Inaugurated on Dec. 27, Choi spoke with the Korea JoongAng Daily and JoongAng Ilbo on Thursday at the Grand Hyatt Hotel in central Seoul during the Australia Day event, an annual celebration to remember the beginnings of the country.

In many ways, the newly appointed ambassador represents a natural link between the two countries. Born in Seoul in 1970, Choi migrated to Australia in 1974.

“I am a beneficiary myself of Australia’s immigration policies,” Choi said, “and its openness and diversity have given me opportunities to come back to Korea as a representative of the Australian government.”

His first posting as an Australian diplomat was also at the Australian Embassy in Seoul, back in 1995, when he served as the third secretary to then-Ambassador to Korea Mack Williams.

“It was in the midst of Korea’s democratization process,” Choi said. “I witnessed the whole process and it was quite an impressive memory that I have of Korea.”

The ambassador said he had met with “the three Kims” at the time, namely late former Presidents Kim Dae-jung and Kim Young-sam, and former Prime Minister Kim Jong-pil, in attending the ambassador’s meetings. He also recalled watching the popular TV series “Sandglass” (1995), which he said depicted “the difficult period of Korea’s democratization.”

Choi said he wants to encourage the people of Korea to continue the effort to move forward.

“In times when the there is so much pessimism in Korea, and words like Sampo Generation are used among the younger generation, I want to remind Koreans that Korea has come a long way,” he said. “In the 20 years that I have been away, Korea has developed dramatically.”

Last year alone, as many as 227,000 Korean tourists visited Australia and over 29,000 students studied there, according to the Australian Embassy.

In regards to reports of physical assaults on Koreans in Australia over the past few years, the ambassador said these cases are random and not indicative of widespread racial discrimination against Koreans in the country.

“Those instances are very unfortunate and we certainly regret that they occurred,” he said. “[But] I totally reject the view that there is a white Australia policy. That is a remnant of old thinking. Australia is one of the most diverse, dynamic countries that welcomes immigration, welcomes foreign students and welcomes tourists from all overseas.

“The instances referred to were criminal acts, and some of them occurred between Koreans,” he added. “What I can guarantee you are that those incidents are incidents of crime, and it doesn’t mean that foreign students are targeted. They are incidents that can occur in any big city.”

Choi said local police in Australia have worked with the Korean Embassy in Canberra to provide further information to students and tourists concerning security measures available.

The two countries’ diplomatic ties date back to 1961. Korea is Australia’s fourth largest trading partner and their bilateral free-trade agreement reached its second anniversary this year.

“We entered into force the bilateral FTA two years ago, and had very strong successes,” Choi said. “The focus really will be on making sure we fully implement the opportunities of the bilateral FTA.”

He added, “We already have a two-plus-two meeting arrangement with the foreign ministers and defense ministers, and Australia is the only country outside of the United States to have that meeting [with Korea].”

“Australia has strong concerns about North Korea’s nuclear and missile program,” Choi said. “We have supported UN Security Council resolutions and sanctions against North Korea. We will continue to voice our concerns and ask North Korea to denuclearize and stop provocative acts in the region.”

In his second time serving as an Australian diplomat in Seoul, Choi said he is looking forward to connecting with the people on an individual level.

“Digital diplomacy is becoming a much more important element of diplomacy worldwide,” he said. “I am committed to engaging with the people of Korea about who I am, what Australia is about and telling them about Australia’s priorities in engagement in Korea.”

“I am interested in engaging [the Korean people] on an individual level,” Choi said, “and building people-to-people ties between the two countries.”

People may come across the ambassador in person, perhaps during a marathon in Seoul or a cycling event from Seoul to Busan, as they are on his list of things to do while in Korea.

For those planning a trip to Australia, the ambassador said to look beyond Sydney.

“I think most Koreans have been to Sydney and Melbourne,” he said. “Australia is an amazing continent, it’s got ski slopes, deserts, tropical forests, the most amazing beaches and some of the best food and wine in the world.”