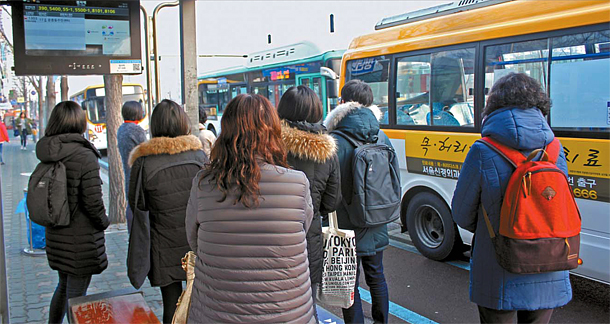 “‘We don’t have time to wait for him! Why does he have to use the bus now?’ This is one of the most common comments I receive,” said Lim Tae-Wook, a 27-year-old man with a first-level physical disability which forces him to use a wheelchair to get around.

Lim lives in Pyeongtaek, Gyeonggi, and often uses a low-floor bus to get around. These buses don’t have steps at the entrance, and use a ramp to accommodate the disabled. Lim uses the low-floor buses in Seoul as well.

Compared to the surrounding region, Seoul serves its disabled population well. In Seoul, 35.2 percent of buses are low-floor, whereas in Gyeonggi only 14.1 percent are.

“The difference between Seoul and Pyeongtaek is the awareness. The Seoul bus drivers are more aware in how to navigate the disabled people than other drivers,” said Lim. “In Pyeongtaek, often, even though the slopes were working fine, I could not get on the bus. This was because the drivers did not know how to seat the wheelchairs in the buses. The drivers turned away, saying that the system was not working. But it was perfectly fine.”

A Seongnam bus driver admitted that the bus companies never educated its drivers on how to operate the seats for the disabled.

It takes about four minutes for a wheelchair to get on the bus, which Lim said caused passengers to complain about him.

Lim also cannot use buses that go to other cities. The express bus doesn’t have a lift to pull up his heavy wheelchair.

A driver of a Gyeonggi express bus surnamed Cho assumed that this is not a problem. “There are free taxis in each city for the disabled people,” he said. “Won’t it be easier for them to use those?”

But these taxis are not free. The disabled only get a 30 percent discount from a standard taxi rate. A middle-aged woman named Song Jung-a, who has a first-level physical disability, said she rarely uses them. It takes at least an hour for a taxi to come.

Currently, Lim is preparing to sue the Pyeongtaek city government for the loss of his right to transportation.

“I think the change essentially needed for our freedom to travel is a change in the perspective of non-disabled people,” said Lim “It is very difficult for services to be developed without their support.”

In Seoul, the city is planning to increase its number of low-floor buses by 55 percent from its current 2,445 buses. It remains to be seen, however, whether these new buses will be accompanied by a change in attitude from both bus drivers and the general public.