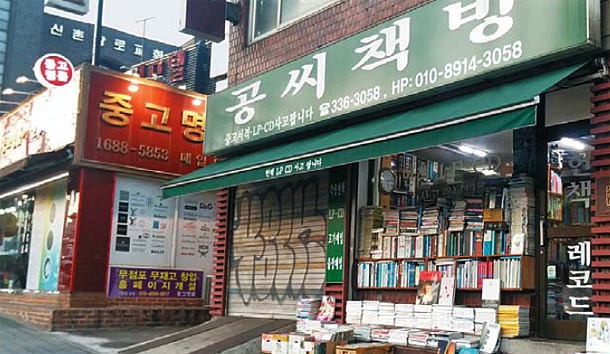 In 1972, even in the midst of financial hardship, 32-year-old Gong Jin-Seok’s love for books was insatiable. With a budget that he had saved up for a decade, Gong started up a family bookstore by cruising through neighborhoods on his bike and bringing home literary masterpieces that people who had moved left behind.

“Everyday, he would come back home with a bag full of books, and our job would be to carefully wipe the covers and organize the books on the shelves,” Gong’s sister-in-law, Choi Seong-Jang, 70, said.

According to Choi, Gong was a dedicated and hard-working book-lover filled with ambitions. His ultimate goal was to create a secondary bookshop next to Kyobo - one of Korea’s largest bookstores established in 1980 - and sell outdated books which were once cherished in the past but could not survive amid the influx of new publications. With this goal in mind, Gong publicized his bookstore by putting together monthly newsletters of book reviews written by his visitors and sent the newsletters to universities nationwide. During the redevelopment period of Seoul, a tough time for small businesses, Gong maintained his bookstore without a wobble. On most weekdays, Gong slept at his store and worked restlessly.

For a while, Gong’s hard work paid off. His business expanded to two locations and his bookstore bustled with visitors. University students visited the store between classes, tired workers came to read during lunch, and retired moms and dads gathered at his store to discuss literature, politics, and poetry.

But perhaps Gong overworked. In 1990, Gong died due to an acute heart attack, leaving his legacy, Gong’s Book Room, to his niece, Jang Hwa-min, and Choi.

Twenty-seven years after Gong’s death, Gong’s Book Room is in crisis. After being kicked out the building accommodations in both Gwanghwamun and Sillim-dong, the store had to relocate its 40,000 books to a small building near Sinchon Station in western Seoul. However, the current building owner in Sinchon is again pressurizing Choi and Jang to move.

Despite the fact that the store holds a large collection of Korea’s invaluable out-of-print books and offers strikingly low costs to customers, Choi claims that Gong’s Book Room is suffering because it lacks readers - mainly due to the advent of the internet and e-books.

“Not many people read physical books everyday anymore,” Choi said. “There’s no need to search through books for information because most young people have the internet.”

Gong’s Book Room is not the only victim of digital domination. Just a street across, Writing Friend Bookstore is also suffering from a limited number of visitors. The owner of Writing Friend Bookstore claims that the business’ sales profit has nearly halved after the opening of Aladin Secondary Bookstore in the Sinchon area. Furthermore, according to Choi and her discussions with fellow bookshop owners, most small bookstores are either closing down to open a franchise business or moving further and further away from the streets.

“I just wish that younger students realize the joy of reading paper books before it is too late,” said Choi. “It would be so sad if nothing’s left for them in a few decades… Although we all have to learn how to follow the present, things are just disappearing and changing so fast.”