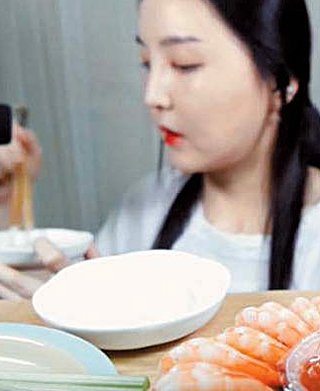 “Crack, splash,” a woman eats fresh shrimp and celery in a silent room. She sometimes drinks cherry lemonade filled with ice and several lemon slices. In a YouTube video running for 35 minutes, the woman keeps on chewing and swallowing food to make sound, also whispering at times.

The video, a form of ASMR, was published through YouTube on Aug. 27 last year by the YouTuber ASMR rappeler and has been seen by over two million viewers. Short for autonomous sensory meridian response, ASMR videos offer calming sound patterns through simple or repetitive actions. They are especially popular with overly-stressed workers who are having trouble sleeping or looking for ways to relax.

Views, however, vary on such clips.

“I often watch the video at night because it helps me calm down and relax,” said a high school student surnamed Kyung, who has been watching the videos for some time. Another viewer of the clip also commented, “It helps me focus on studying and sleeping,” on the YouTube page.

Some others, however, do not find the videos comforting and see as nothing more than an interesting idea. “It was my first time watching ASMR video. It was weird and it tingled in my brain,” one of the viewers commented on an ASMR video on YouTube.

While these clips are not a new invention - the first was actually posted in 2009 - they have recently grown in popularity in Korea as celebrities and experienced YouTubers have started creating their own ASMR videos and distributing them online.

Apink released a teaser of an ASMR video with their new album “Star Of Star” on Sept. 12th, 2016. Choi Yoo-jung from girl group IOI made her own ASMR video by whispering the title of their new song “Whatta Man.”

DANA, a Korean YouTuber, is an active creator and distributor of ASMR videos, and has been working on them since 2014.

These videos are going viral through the hands of K-pop fans and viewers.

“It is scientifically unproven, but I assume that it might help. Random noise having equal energy per octave is called pink noise. ASMR is really similar to Pink Noise, which gets people’s attention with a regular sound and makes it quieter to aid sleep.” said Kim Sun-mi, a doctor from the psychiatry department at Chung-Ang University Hospital.

Still, it remains too early to say whether the videos can always help people relax.

“Not everyone feels the same way, for some people they can chill and relax, some get annoyed by listening to ASMR. Also, if people rely too much on ASMR, they will get used to it and will soon find that they won’t be able to sleep without listening to ASMR. ASMR videos can introduce a bad habit.” said Han Jin-Kyu, chairman of the Seoul Sleeping Center.