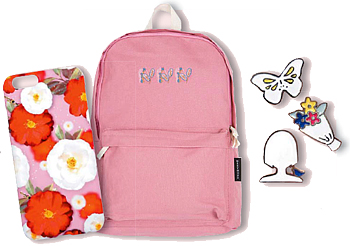 On August 14, 1991, the day before the 46th anniversary of Korea’s independence, Kim Hak-soon went to the Korean Council for the Women Drafted for Military Sexual Slavery by Japan, and made the very first testimony regarding Japan’s forced sexual slavery at frontline brothels during World War II.

In fact, she was the first Korean victim to share such a painful history. No other victims, until then, dared to make their stories public, as they thought it would only leave them disgraced.

The number of surviving comfort women, as they are euphemistically called, currently registered with the government stands at 39. Many individuals, NGOs and companies are working to increase awareness of this issue and help Korea and Japan reach an agreement that satisfies all parties involved.

Marymond, a design shop established in 2012, promotes and supports the victims with its fundamental philosophy being, “to recognize the ones who should be respected.”

One method the group uses to publicize their stories is through a flower pattern used on the items that they make.

Flower patterns, produced from pressed flowers designed by the victims, portray each woman, and flowers are selected to express individual beauty, not combining or unifying them as victims.

Yoon Hong-jo, CEO of Marymond, said “The perspective to ‘help them’ is changing to ‘respect them,‘” adding that he thinks “it is the most outstanding change.”

More than half of the profits from items sold are donated to associations for victims.

“Our donations are used for memorials, welfare funds, trips of peace to America and repair work for The House of Sharing.”

The House of Sharing provides a home for the surviving victims and was built with money raised by a number of organizations and individuals in 1992.

“Out of all responses [that we receive], the best is when our customers thank us for establishing Marymond,” added Yoon.

But what this company does is not limited to designing and selling those products. They are involved in product collaborations with other brands and organize marathon races to improve awareness of the women. In addition, Marymond has recently created a forest in Nanjing, China, so that future generations would remember the stories of the Korean victims.

But Marymond dreams of even more partnerships and projects.

“We want our company to become a multi-brand group that provides various styles of service and products based on our ultimate mission which is to recover the dignity of the victims.” said Yoon. In fact, thousands of individuals and organizations are working to help the victims, as evidence by the growing number of museums and monuments around the country dedicated to these comfort women.

Most recently, a civic group installed a statue of a girl symbolizing the victims of Japan’s wartime sexual slavery in front of the Japanese Consulate in Busan on Dec. 30 after the Dong District Office gave its approval.

But challenges remain. Although an agreement regarding compensation and an apology from Japan was made, the victims are rapidly aging. On Dec. 6, another comfort woman passed away.

“The major goal that I have for our company is to be a brand that tells stories of our victims to the entire world” said Mr. Yoon.

“And to do so, I want to open Marymond shops in different parts of the world in a few years, especially in big cities so we can spread the word about our grandmothers in greater ways.”

Historians estimate that up to 200,000 women, mostly from Korea, were forced to work in front-line brothels for Japanese troops during World War II.