After tiring year, Kim Hyo-joo is looking to bounce back

After tiring year, Kim Hyo-joo is looking to bounce back 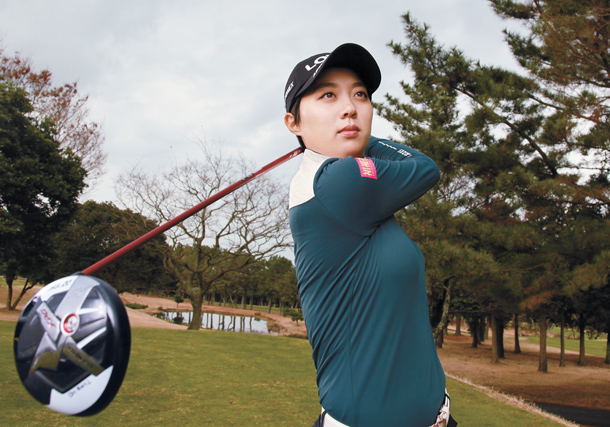 Kim Hyo-joo, two years into the Ladies Professional Golf Association Tours, says she isn’t pleased with her 2016 performance. After 11 tiring months of competition, Kim is resolutely working on her stamina and long drives through the winter training. “Next year will be my third year in the LPGA Tour,” said Kim. “I hope I will be able to show my fans a big improvement by the same time next year.” [YONEX]

“If I was to score myself, I wouldn’t give myself high points,” said Kim. “My shots were up and down throughout the season so it was a year of turmoil. But just wait for next year. Things will be different.”

In a recent interview with the JoongAng Ilbo, Kim expressed her dissatisfaction with her performance this season. “I did win once in the U.S. Tour and once in a Korean Tour,” she said, “but this isn’t enough. I have a lot to fix over the winter training.”

Kim took off with a fresh start for 2016 in January when she won her third title in the Ladies Professional Golf Association (LPGA) Tour, the season-opening Pure Silk-Bahamas LPGA Classic by closing with a 7-under 66. Kim finished the year with a joyous victory in China, totaling 15 professional titles altogether. “Winning in the last competition was a consolation, but it really was a tough year,” said the relieved champion.

The top golfer left for her off-season training in Thailand on Dec. 26. After 11 months of traveling back and forth from Korea to the United States, the exhausted Kim kept coughing through the interview.

Kim’s tiring year didn’t prove so rewarding, though. Although Kim had successfully closed her year of debut in the LPGA Tour in 2015, ranking 13th place according to the amount of prize money, she came down to 20th this year with $753,638 in total. Rio Olympics was out of the picture.

“I just didn’t feel good with my shots all season. With shots like these, I won’t be able to play well in any matches,” said Kim.

Struggling though she was, Kim had originally been known for her so-called computer shots, known for their precision. However, Kim’s Green In Regulation (GIR) for this season was 66.9 percent, a statistical number indicating the number of times a golfer gets his or her ball onto the putting green in one stroke. That placed her 76th place in the Tour.

Nevertheless, as tough as the game was for Kim, she pulled through thanks to her excellent putting. Kim closed the season with the third-highest putting average, 28.79 on average, and fourth in the number of puts putted on green with 1.75.

“There weren’t many games with both good shots and putts,” she said. “The Bahamas Classic, where I won for the first time [this year], and Hyundai Opening, the last match of this year, were where I made it through because those things worked out.”

Kim’s outstanding putting is on record. In the Evian Championship on September 2014, Kim ended the first round with the least number of shots, 61, finishing 18 holes with just 23 putts.

“It’s been my second year in the LPGA Tour, but I haven’t improved much compared to last year,” said Kim. The 21 year-old confesses to still having some problems getting used to the Tour, especially with finding the right caddie. The caddies who carried Kim’s golf bags in the first and last rounds of this year were not her set partners; Dean Herden temporarily took the place in the Bahamas and Seo Jung-woo assisted in China.

Through the season, Kim replaced her caddie multiple times, emphasizing the need for teamwork. “It’s crucial to keep in tune with the caddie,” she said. “The caddie’s role becomes bigger than ever when shots aren’t in place. Caddies know the player the best. An excellent caddie helps the player keep calm and make it through the game.”

Since the young Korean golfer is having a hard time with her English, communication with foreign caddies is another problem she must overcome. “The last match was meaningful in so many ways,” she said. “When my shots and stamina were in shape, victory followed. And that really helped with my self-confidence. My goal is to get back the muscle I had in the second year of high school, when I worked out the most.”

Her focus on the upcoming winter training is to lengthen the distance of her shots - 15 more yards with her drivers and about 40 inches with her irons. Her biggest aspiration for 2017, however, is to develop the world’s best putting skills. For a professional golfer, putting is directly linked to performance, and thus, money. “‘Putting Queen’ is the title I want the most,” said Kim. The title she wants to win the most is the LPGA Lotte Championship, which is held by her sponsor.

Kim is preparing herself for next year’s Bahamas LPGA Classic, which begins on Jan. 26, in which the 2016 winner will compete for a two-time title of the game. As of now, the eager golfer will be working on her stamina and long drives.

“Next year will be my third year in the LPGA Tour. I hope I will be able to show my fans a big improvement by the same time next year,” said Kim.