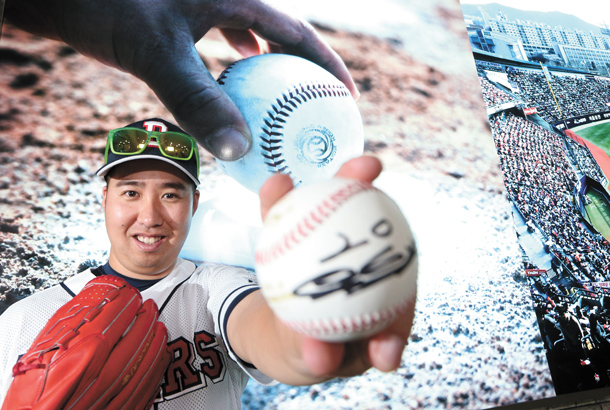 Even with his slow pitches, Doosan’s southpaw pitcher, Yoo Hee-kwan, is the 10th-placed pitcher in the Korea Baseball Organization. However, there are many doubts as to whether Yoo can move on to the international stage. Yoo is on the reserve roster and aims to elevate the prestige of Korean baseball at the World Baseball Classic. [JOONGANG PHOTO]

Throwing a fastball of 165 kilometers per hour (102 miles per hour), Japanese pitcher Shohei Otani of Nippon Ham descends the mound at the end of the inning.

Coming up, a 130 kilometer per hour southpaw pitcher from the Korean national team takes the mound.

Will these two pitchers face-off in the 2017 World Baseball Classic (WBC) this March? The “slow-poke” pitcher, Yoo Hee-kwan, of the Doosan Bears, just might make the list for the WBC Korean national team roster.

The southpaw, Yoo, is the most consistent starting pitcher in Korean professional baseball. A full-time starter since 2013, he has had two-digit victories.

Of all the Korean players in 2015, he produced the most, 18 wins. In spite of Yoo’s 15 wins last year, too, he never has been chosen for the national baseball team due to his slow pitches. Yoo’s fastball is on average a speed of 128 kilometers per hour, and at his best, 135 kilometers per hour.

Unlike other ace pitchers throwing at 150 kilometers per hour, Yoo’s speed is lackluster. His fast ball may even be slower than a high school pitcher’s in some cases.

However, there remains an opportunity for Yoo. On Dec. 2, his name was raised in the announced 50-person reserve roster. With vacancies opening on the national team, there is a high possibility Yoo will be included in the finalized roster of 28.

Even if he is excluded from the final roster, with the end of each round, teams may alternate two pitchers.

“For a while, I refused interviews regarding the WBC,” Yoo said at Jamsil Stadium on Tuesday. “I thought it would have been a faux pas, but I aim to represent the country and elevate Korean baseball’s prestige.”

He also said, “I realize that because I haven’t shown anything in international tournaments, there are many who are concerned. If chosen, I have the confidence to play well.

“I heard a few times recently that baseball prospects see me as a role model. I thought, ‘I did well to start baseball.’ I want to prove at the WBC that a pitcher with a slow pitch can be successful.”

This was the secret behind Yoo’s 0.189 batting average against foreign right-handed batters such as Luis Jimenez (LG Twins), and Wilin Rosario (Hanwha). Yoo didn’t allow a single home run. His comrade at Doosan and catcher on the national baseball team, Yang Eui-ji, said, “Frankly, I can’t say for certain whether Hee-kwan will make the [WBC], but he’s obviously a powerful pitcher against right-handed batters.”

Yoo undoubtedly wants to meet the famous Japanese “monster” Otani at the WBC. The orthodox right-handed Otani set the record for fastest pitch at 165 kilometers per hour in Japanese professional baseball.

In the two games against Korea in the 2015 World Baseball Softball Confederation (WBSC) Premier12, Otani only allowed three hits for 13 innings and demonstrated his superhuman abilities by not giving up a single run.

If South Korea progresses from the first round of the WBC on March 6-10 at the Gocheok Sky Dome in Seoul, Korea will face Japan in the second round March 12-16.

“I’ve seen a headline from the internet, ‘If we put Otani and Yoo Hee-kwan together, what would that be like?,’” said Yoo. “I’m starting to get interested, too. If Otani and I were to face each other, wouldn’t JTBC’s (sole rights holder of the WBC in Korea) ratings soar? Otani is an amazing athlete who is right out of a comic book. Although he’s younger than me, there are a few things I can learn from him. I want to see his pitching up close.”

Regardless of Yoo’s potential selection, he moved up his training schedule for the year. Yang, Min Byung-hun, Oh Jae-il, Hur Kyung-min, Chang Won-jun, Kim Jae-hwan and others are departing for Sydney, Australia on next Thursday.

They plan to prepare themselves before the scheduled assessment for the national team roster in the middle of February. “Although it’s winter, my condition is as good as it was in the Korean series,” said Yoo. “Training in a warm place, I will make a body that can throw balls.”

The “Fantastic Four, Dustin Nippert, Michael Bowden, Chang Won-jun and Yoo Hee-kwan, brought two losses against LG in the Korean Series. “I heard the LG opening lineup was called the ‘Amazing Four,’” said Yoo. “That’s a fun phrase, however, Doosan is superior. It will be difficult for LG to follow us.”