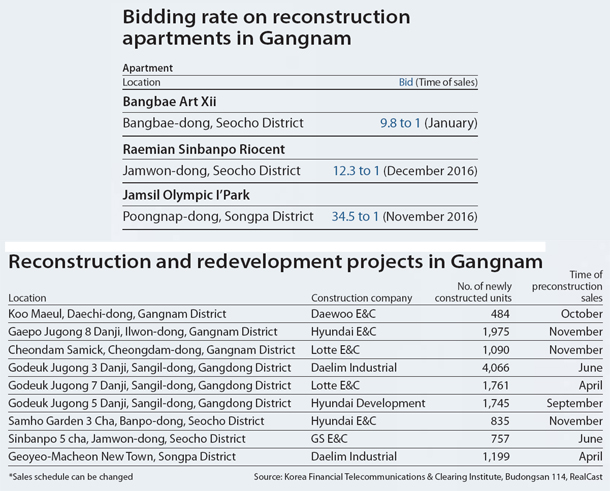 On Wednesday, five or six massive trucks loaded with construction debris were moving in and out of the demolition site where the five-story Siyoung Apartments once stood in Gangnam District’s Gaepo-dong in southern Seoul. The apartments, which were first built in 1984, had a total of 30 buildings, half of which have been broken down.

The reconstruction apartment residents’ union plans to bring down all 1,970 units by early March and break ground for a new apartment.

“We plan to push with preconstruction sales of the 212 units of the newly built 2,296 units in May,” union representative Lee Seung-hee said.

The forecast for this year’s overall real estate preconstruction apartment sales is expected to be cloudy, unlike in the past two months where they have been heating up. In 2015, over 510,000 apartments units were sold even before they were completed. Last year, that number amounted to 460,000 units. In previous years, such apartment sales averaged around 300,000 units.

But roughly 310,000 sales are expected to be made, going back to the level seen before 2015. However, there seems to be exceptions: apartments that are currently in the process of reconstruction or redevelopment. The industry is expecting sales of such apartments to surge this year.

According to real estate information provider Budongsan 114, preconstruction sales of apartments categorized as either reconstruction or redevelopment apartments are expected to surge 83 percent compared to last year’s figure. It said this would be the largest number of such apartment sales since related data has been complied in 2000.

Competition in the four districts south of the Han River - Gangnam, Seocho, Songpa and Gangdong - is likely to be at its highest. Preconstruction sales of such apartments in these four districts are expected to be double that of last year’s, at 7,100 units.

According to GS E&C, competition for the Bangbae Art Xii complex was at 9.8 to 1 as of Wednesday. This comes at a time when the government, under a new regulation announced in November, has forbid those who won bids to the purchasing rights of these apartments in Gangnam from selling them before they actually move in. Yet demand for such apartments remains high.

“It was a result that even surprised us considering how the government has made it more difficult to apply for the bid and even banned sales of apartments when winning it,” said Cho Jae-ho, a senior executive at GS E&C in charge of housing sales.

Market experts say one of the reasons for the popularity of these apartments in Gangnam, despite government regulations, is because of the temporary suspension of the collection of excessive profits made from such projects, which ends at the end of this year.

This regulation was first introduced during the Roh Moo-hyun administration in 2006 to cool off the overheating real estate market created by the same reconstruction and redevelopment projects in Gangnam.

When the value of an apartment exceeds 30 million won ($25,500) after the building is reconstructed or redeveloped, owners have to pay up to 50 percent of the excess profits. The government, however, suspended this regulation in 2013 as the local real estate market was struggling.

“The [reconstruction owners’] unions are rushing the project before the suspended payment on excess profits comes back into effect next year,” said Lee Nam-soo, head of the real estate team at Shinhan Investment.

Last March, preconstruction sale prices on a 84-square-meter (904-square-foot) apartment at Gaepo 2 Danji apartment Raemian Blesstiage, which is being reconstructed, were between 1.45 and 1.6 billion won, which included a 100 to 200 million won premium. The demands are high on these neighborhoods because they are known to have one of the best education environments, including leading private tutoring institutions and accessible public transportation.

“There’s confidence that prices will go up since demand is high and supplies are limited,” said Chung Yeon-shik, vice president of iNEX Housing.

This year is expected to be the year when the supply of apartments exceeds demand nationwide, which could force prices to fall. According to the Ministry of Land, Infrastructure and Transport, 368,000 units are expected to be completed, whereas demand is only expected to amount to 273,000 units.

Some market experts say such an excessive supply will happen even in Gangnam, starting in the second half of 2019, when apartments that were sold this year will be completed.

“But unlike in the provinces, since there is potential demand in Seoul, this will not become a huge burden,” said Kim Kyu-jeong, an analyst at NH Investment & Securities.

“The government should continue to monitor the four Gangnam districts closely so that the market doesn’t overheat or cool down rapidly,” said Kwon Dae-joong, a real estate professor at Myongji University.