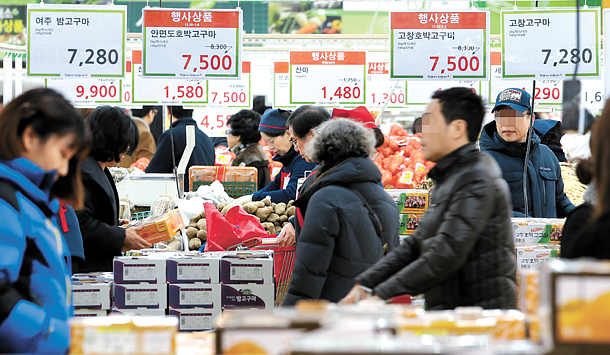 Customers shop for produce at a large discount store in Seoul early this year. While government statistics show inflation at around 1 percent, many produce prices have been rising rapidly, increasing the burden on Korean consumers. [YONHAP]

A 56-year-old homemaker in Ulsan surnamed Song was incredulous when she heard the government had set the official inflation rate for last year at just 1 percent.

“That doesn’t sound right,” she said. “I guess that’s what the government says every year” - last year, it was a record-low 0.7 percent - “but that’s not what we see when we go shopping for groceries.”

Out of 460 products in the consumer price index, nearly two-thirds, or 306 products, had price increases last year, according to the national statistics agency. Despite the figure indicating rising consumer prices, inflation last year was set at 1 percent, or more precisely 0.97 percent.

Song’s concerns about the government’s figure are echoed by many Koreans who feel the official inflation rate does not match the price increases they’re seeing at the supermarket. Even more worrisome is the discrepancy’s impact on those receiving government pension, which rises based on the official inflation rate. They’ll continue to struggle as goods prices go up faster than their income.

If one bases inflation on the aggregate price increase of the 306 products last year, the average rate for 2016 was 4.05 percent. Deflation based on the average price decrease of the other 133 products was 3.18 percent. Just from these figures alone, the rate of inflation should have been set at around 1.86 percent, almost double the government’s 0.97 percent.

“When I go to the store, more than half the things I buy went up in price compared to a year ago,” said a 44-year-old homemaker surnamed Lee. “It’s strange to see government statistics showing stabilization in prices.”

The discrepancy can be explained by the way in which the government weighs the value of products to reflect the share of each item in consumers’ total expenditures.

Statistics Korea gives a weighted value to each of the 460 products in the index, which all add up to 1,000. It’s here where the inflation calculation starts to become muddy.

Two popular staples, napa cabbage and radish, each experienced the biggest price increases last year of 70 percent and 48 percent, but they carried a meager weighted value of 1.2 and 0.6, so their inflation is reflected less in the index. “We calculate the consumer price index for the entire population,” said Woo Young-jae, director of the price statistics division at Statistics Korea, “so the price change felt by each household will be different.”

The most heavily weighted items on the index are housing-related. Jeonse, or rental contracts with lump-sum deposits, had a weight of 49.6. Monthly rent was weighted 43.6. Together, these two expenses took up about 10 percent of the entire index.

Items like mobile phone, gas, electricity, apartment maintenance and household fuel bills were also weighted heavily on the index. Their prices, though, either went up modestly or went down in 2016. Monthly rent, for instance, saw 0.4 percent inflation, while electricity actually experienced deflation of 4.1 percent. The price of household fuel, which was weighted at 18.3, plummeted 17.3 percent.

Everyday goods like cooking oil and rice, however, appeared further down in the list. Tofu, for instance, had a weighted value of 1.2. Staples like peanuts, flour and vinegar were weighted just 0.1 each. Their impact on overall inflation would have been negligible.

Vegetables such as lettuce, spinach and carrots had price increases of 17.2 percent last year, but each had a weight value of less than 0.5. Napa cabbage, mushrooms and garlic were the only vegetables with a weighted value above one, at 1.2, 1.1 and 1.2 each.

So the overall inflation rate calculated by the government isn’t necessarily wrong, but it is quite far from the changes people actually see on store shelves. Some experts say such a disparity could have an adverse economic impact.

Lee Geun-tae, a senior researcher at LG Economic Research Institute, said the impact of price increases could amplify with a prolonged economic downturn. “People don’t see their wages go up, which means the impact of price increases hits them harder,” he said. “In the short term, the government must control the inflation of daily necessities, and ultimately, people’s income must increase.”

On the government’s part, the statistics agency does revise the composition of its consumer price index regularly to better reflect market conditions and trends. In 2016, for instance, it revised the index to exclude 10 items including magazines, mackerel pike and paper dictionaries, and added 18 new items such as blueberries, microwaves and dosirak, packaged meals sold at convenience stores, to account for their growing popularity. 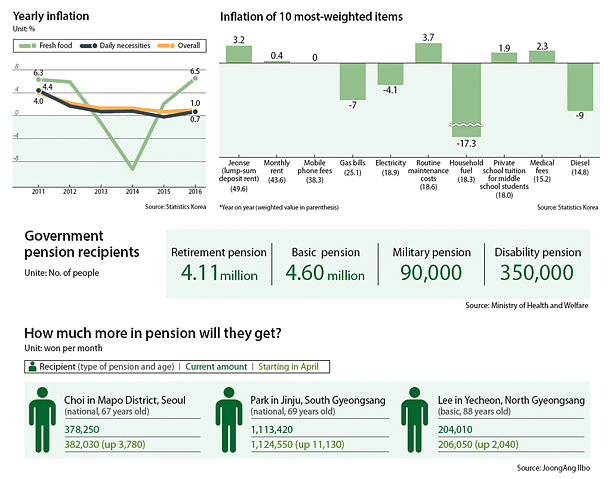 Still, many aspects of the index, such as the weighted value of certain products, remain divorced from actual market conditions, and analysts warn that such a discrepancy could lead to government policy that does not accurately reflect the economic conditions of pension beneficiaries like retirees and disabled citizens.

“All together for the past few years, I think my national pension went up by just few thousand won,” said a 67-year-old retiree surnamed Choi who lives in Mapo District, western Seoul. “I can’t even tell the difference.”

About 9.15 million Koreans receive government pension, which increases each year based on the official inflation rate. That means benefits this year will only go up by 0.97 percent.

The government in the past has touted one of the benefits of the national pension program as keeping up with the inflation rate, unlike private pension programs. But looking at the past couple of years, it’s questionable whether this is in fact something to boast about. Pension benefits went up by just 1.3 percent in 2014 and 2015. Their growth rate took a toll in 2016 when the authorities decided the overall prices of goods only went up by 0.7 percent the year before. Now, the average retirement pension for 4.11 million recipients will go from 354,763 ($302) won in 2016 to 358,310 won in 2017, a 3,547 won rise.

“Everything went up in price - food, groceries, you name it,” said an 83-year-old surnamed Kim, who lives in a small gosiwon meant for short-term stay in Eunpyeong District, northern Seoul. “But they told me my pension will increase by 2,040 won this year. How am I supposed to get by when everything goes up except the money I have to spare?”

Kim receives 204,010 won each month in basic pension and 150,000 won from a part-time job. Together, he has about 350,000 won to spend each month. After paying for his cramped room, which costs 250,000 won a month, he barely has any money left to spare. He says his government pension, his main source of income, has been at a standstill for as long as he can remember.

A recipient of disability pension, an epilepsy patient, said he thought the government would raise his benefits by 30,000 won this year but was disappointed about the 2,040 won rise.

The Ministry of Health and Welfare says it is law for pension increases to be based on the inflation rate set by Statistics Korea, so it has no choice but to abide by it.

“If the pension does not sufficiently reflect the purchasing power of recipients and current economic dynamics, then it will lose its real value,” said Jung Chang-lyul, a professor of social welfare at Dankook University.