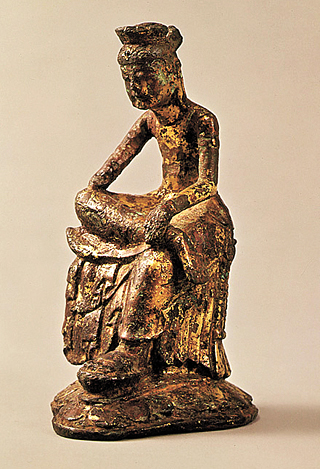 
This 17.5-centimeter high Maitreya statuette, discovered at a building site in Pyeongcheon-ri, Pyongyang in 1944, is marked by rust covering most of the body and scorch stains probably caused by a fire that razed the shrine where it had been stored.

The statues of Buddha assuming a pensive posture had been found only in the archaeological sites of Baekje (18 B.C.-A.D. 660) and Silla (57 B.C.-A.D. 935), suggesting that statues of this kind had been made only in the two Korean kingdoms.

The discovery of this statuette in 1944, however, revealed that Goguryeo (37 B.C.- A.D. 668), the third earliest Korean kingdom, had also worshipped bodhisattvas assuming a meditation pose.

The bodhisattva statue features the head in a tri-peak headgear gently bent forward, square face with half-closed eyes and smiling mouth, naked upper body, slender waist, and skirt-like, lower garment draped down to cover the entire lower body and the pedestal, creating numerous folds as it hangs down.

He has his left foot pendent on a small lotus pedestal and the right crossing the left knee.

He holds the right ankle with his left hand but has lost the right forearm, although the fingers of his right hand are clearly touching the right cheek.

The head is disproportionately large compared to the slender body; other details including the excavation site show that it is a Goguryeo work of the late 6th century.